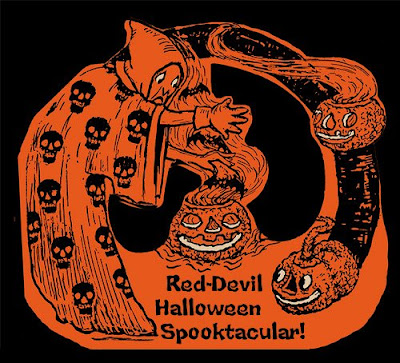 As I stated yesterday the Red Boy and I got together for some ghoulish fun and put some of our all time fave Halloween 45’s to the needle and put together a nice little 2 part mix in preparation of the final stages of Halloween!

So please dear fiends, dig in to the 1st part of what the red boy and i are calling the Red-Devil Halloween Spooktacular!

And don’t forget to head over to Blues for the Redboy for the 2nd part! (linky at bottom of post)

and now, on with the show! 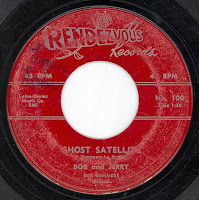 DevilDick: Odd one here. Don’t know much about old Bob-& Jerry here except that this is supposedly one of Lux & Ivy’s (Uh, The Cramps…) faves and that Bob is Bob Summers on the gee-tar and Jerry is Jerry Le Fors:

And that these two wrote songs for Patsy Cline! I guess trying to catch fire with the “space” and “monster” themes of the 50’s they coupled the 2 together for this creepy instro. And upon further review I see this weird little instrumental is from 1958. It’s made the cut on various comps and I also see that The Hound has a liking for this tune. Good enough for me! 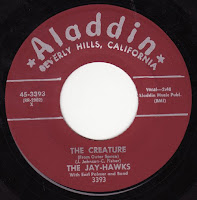 The Jayhawks - The Creature

RedBoy: Y'all remember 'Stranded in the Jungle' right? Well the 'Cadets' cribbed their hit version from these so-called So-cal 'Hawks' (the Gadabouts also released a version on Mercury). Tryin' to follow the 'Flash' formula on their new imprint 'Aladdin', the 'Hawk's' penned the enclosed 57'novelty romp, this time leavin' the jungle behind for a cemetery. I've always loved this tune. Perhaps it is upon hearing the phrase "Creature from the Black Lagoon" sung during a choral interlude, either that, or the fact the somebody 'wanders into the wrong record', a device the band would attempt again in their later incarnation the Vibrations! 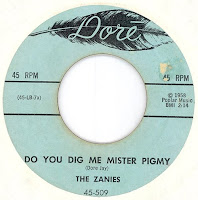 The Zanies – Do You Dig Me Mr. Pigmy

RedBoy: Holy shit! This record is amazing! Definitely one of my top five faves, this record sounds like the audio equivalent of two people bangin'. Most people know ole' Flip from 'Jungle Hop, released on the Challenge label in 1958. And while 'Hop' is a stone-cold-killer - no doubt - 'Witch' is the jewel in Kip's Royal-Crown-Crown. Featuring sax-blaster Jim Horn (*wink*), on loan from Duane Eddy's Rebels, 'Witch' grinds it's way into the hips of history like no other song can. 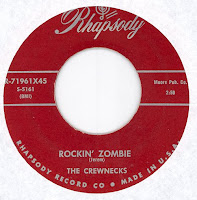 DevilDick: Straight outta Wilkes-Barre, Pennsylvania we have The Crewnecks w/ a classic Halloween cut -Rockin’ Zombie. Unlike the creepy overtones of the mummy’s bracelet or mad witch this here cut is a fun rocker that will get all the Zombie’s shaking!!!

It took the devil a while to finally unearth an original 45, but I did, and here it is for you now! 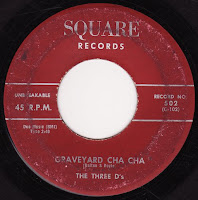 RedBoy: Can't say much about this cha cha chiller besides the fact that it is hardly 'Square' despite what the label might suggest. Cut in either 56' or 57', these D's also recorded several sides for Brunswick, Paris & Pilgrim before passing into that most frightening dimension of all - obscurity. 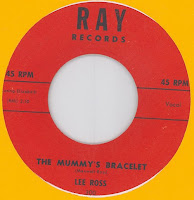 DevilDick: One time member of Bob Wills and His Texas Playboys, (is that true?) Lee Ross gives a spine chilling tale! If ever you needed a deterrent from going to a museum and steeling a bracelet off the arm of a mummy then this song is for you! When I put this song on one of my Halloween mixes last year for my kids, my little man who was 6 at the time told me “that song is too creepy Dad! Did the mummy kill the person?” yep son, the mummy killed the person, let this be a lesson, DO NOT STEAL FROM THE DEAD!!!!

Editor's note: Both me and me and DevilDick steal from the dead every day and I ain't never "turned to stone"...ok, maybe just that one time.

Devil Dick: 'Tis true but i hate to see what awaits in the next world in retribution of "stealin' from the dead"...


Clicky below for part 2 and head over to my dear fiends page!

Cool!!! You rule, ghoul!!
picked up part 2 at red boy's place - most excellent mix - thanx for making my life a lot easier and a lot more fun.. put up links on my page for others to follow the bread crumbs..

Well, I'm a little late to the party, but I finally had a chance to listen to this (new x-mas ipod helped) Great job! I really enjoyed the mix and how you used the Winchell's narative to tie it all together. Can't wait for next year!

I found your page while searching for "The Three D's". While not well known outside the "mormon" community, they hardly became obscure.
They did some folk albums for Capitol records in the 60s, and two of them were still touring in the 70s (I saw Dick & Duane as "The D's" in concert). Here's a link for you.
http://www.geocities.com/phoenix3ds/