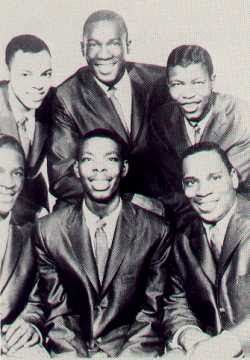 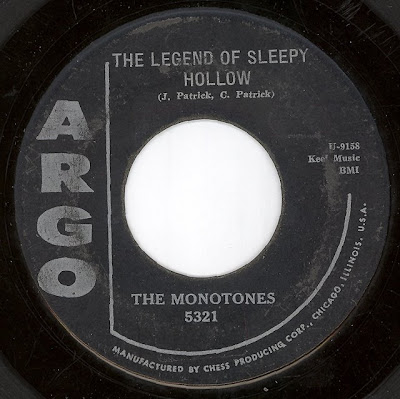 Check my Mix i did with The Red Boy for more Monotones!

The Monotones were a six-member African American "doo wop" vocal group in the 1950s. They are considered a "one-hit wonder," as their only hit song was "(Who Wrote) The Book of Love", which peaked at #5 on the Billboard Top 100 in 1958.

I'll take the legend of sleepy hollow over the book of love any day...

The Monotones formed in 1955 when the seven original singers — all residents of the Baxter Terrace housing project in Newark, New Jersey — began performing covers of popular songs. The members of the Monotones were :

Monotones - Legend Of Sleepy Hollow
Posted by Devil Dick at 12:05 AM

You've set a high bench-mark DD, how are you gonna top these crypt kickers next year?

that is what red boy said to which i said, i might be around next year so let it all hang out this year!

The joy...
I was playing your stuff (and the Dude's and RedBoy's all day while we were decorating the pub. Got quite a few smiles from staff and customers alike but the littles gremlins assigned to do some of the work were to busy dancing at times...
can't wait for the real deal on quiz night tomorrow and then all day Friday.
Thanx a million for all the hard work and devotion :)

I always loved this song (they used to play it on WCBS-FM) but never knew it was the 'Book of Love' Monotones. Didn't know they were Jersey boys either!
Thanks!