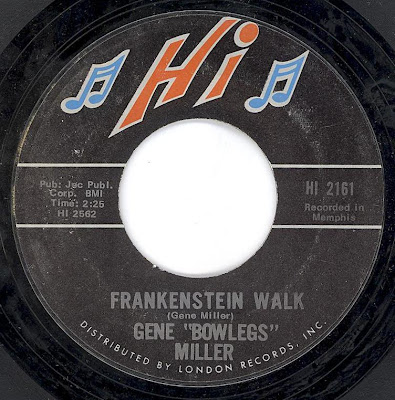 When i was about 5 or 6 i was way into horror movies and comic books. i begged my mom to buy me this plastic 6 foot glow in the dark Frankenstein from the back of a comic. I was so psyched when it finally came and immediately hung it up on the back of my bedroom door. Well later that night when it was bed time i had this 6 foot glow in the dark monster staring at me while i was trying to sleep. i ran out of the room and went and slept with mom....

Now some years later i wish i still had that stupid thing and i've tried to find one and they go for like a hundred bucks.... fuck that shit. But if someone has one for a dollar i'll buy it from you..... heh.... 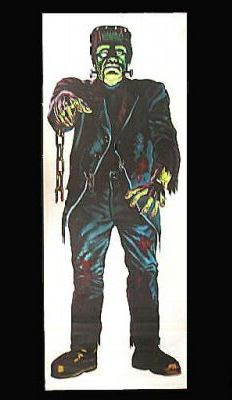 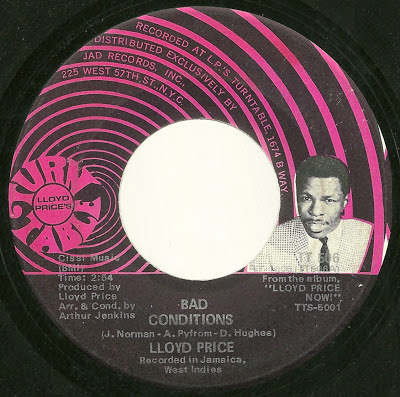 I guess not much has changed since this record was cut and with Hurricane Sandy ready to render some "Bad Conditions" here on the East Coast I give you a funky little tale from Mr. Personality Lloyd Price.

Dongs removed due to a DMCA complaint... 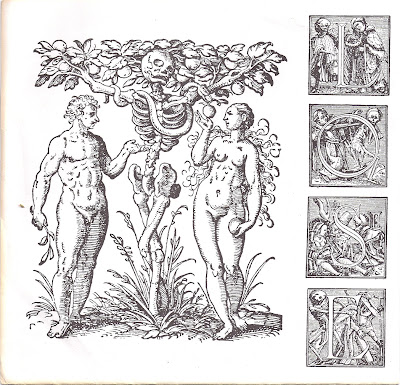 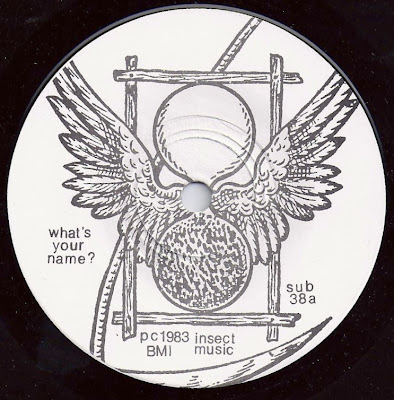 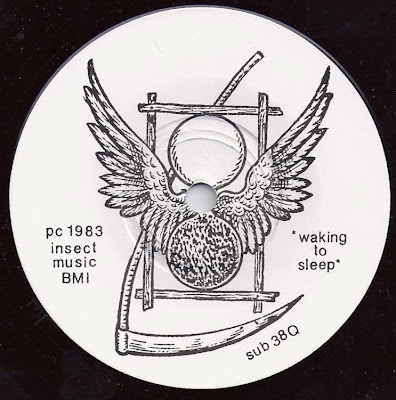 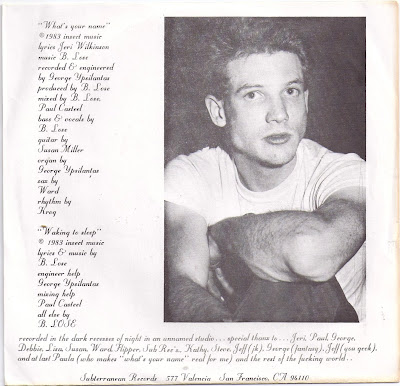 Flipper's Bruce Loose looses an "O" and goes solo with a quieter chaos that goes under the skin and heads for the heart. The stuff that insomnia is made of....

One day the world will see what an interesting and under-rated record this is... Or maybe not.... 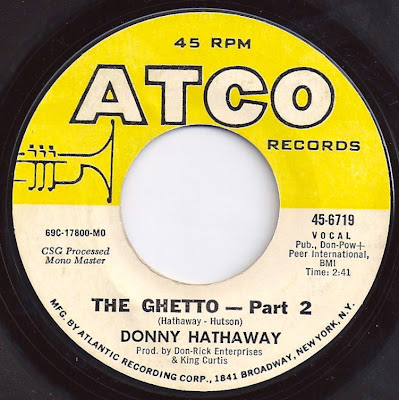 Still trying to clean out my que of old things to post.... I've posted about Mr. Hathaway before and you can read and hear that HERE:

Songs have been removed - DMCA complaint... 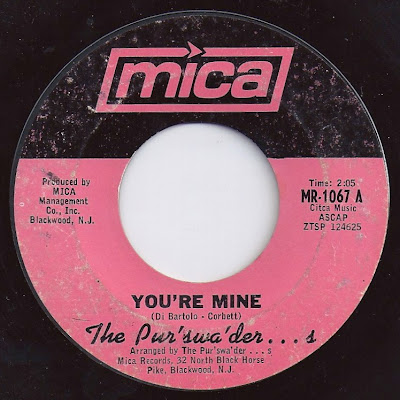 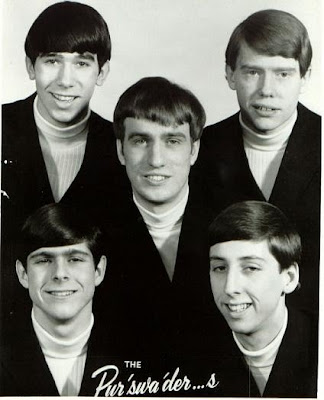 Goofy names are nothing new in Rock & Roll, with the misspelling of band names and use of Umlauts and symbols, i never really understood it and as you can tell by this 45 its been going on for a looooooooong time.

I pulled this little New Jersey gem out of a box of shit recently. A nice little garage number. Nothing to punky or wild but cool non-the-less. I'm always on the look out for shitz from my home state. Don't ask me why. I was happy to leave that over run w/ Jersey Shore type scum bags, bennies, old people & half a police state in the dust, yet i still feel the need to collect all things Jer-Z....

As for the Pur' swa' der...s here is some info i lifted: Winners of the 1967 New Jersey Battle of the Bands, The Pur'Swa'Der...s would later compete in the National Battle and finish in a very respectable sixth place. A very successful regional band, The Pur'Swa'Der...s toured for three years as part of a traveling auto show, and recorded a couple of original singles. The band would later morph into The Strimbling Blimbles and record a very successful single before calling it quits in 1971. 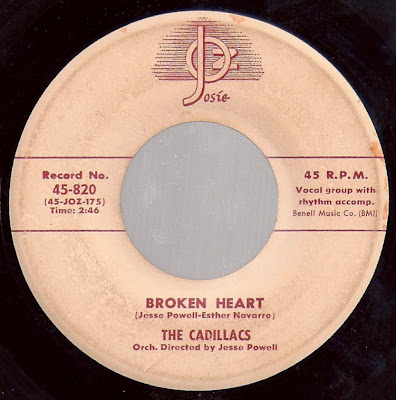 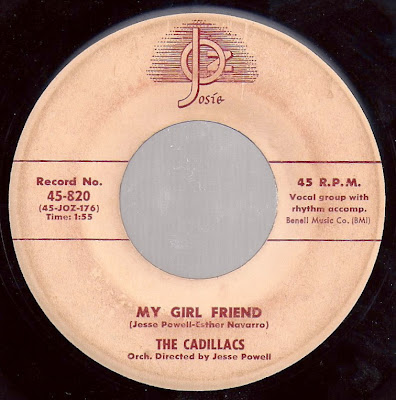 Going in the way back time machine here w/ some R&B/Doo Wop from 1957 from The Cadillacs. I post another 45 by them HERE: a while back. To some people this style of music is a dead art form but i personally really dig it. And yes, i still still listen to Celtic Frost, Hellhammer & Discharge....

As for The Cadillacs, here is the wiki info:

The Cadillacs were an American rock and roll and doo-wop group from Harlem, New York; active from 1953 to 1962. The group was noted for their 1955 hit "Speedoo", which was instrumental in attracting White audiences to Black rock and roll performers.

The group came together as The Carnations in 1953, with members Earl Carroll (lead vocalist), Bobby Phillips, Lavern Drake (bass vocalist), and Gus Willingham. As the group moved into the recording studios, James "Poppa" Clark was added as a fifth member, and the name "The Cadillacs" was given to them. The group's first recording came in July 1954, with Josie Records #765, featuring Gloria and Wonder Why.
In 1955, Willingham and Clark left the group and were replaced by Earl Wade and Charles Brooks. At this time, the group first began to experiment with choreography, suggested by manager Esther Navarro. Later that year came the group's biggest hit, "Speedoo", Carroll's nickname. Lavern Drake left the group in 1956 and was replaced by J. R. Bailey.
In 1957, differences in opinion caused the group to split. One group was initially known as The Four Cadillacs, with current bass J. R. Bailey, former bass Lavern Drake, and new members Roland Martinez and Bobby Spencer. The previous year, Bobby Spencer had written the "My Boy Lollipop" pop song shuffle for Barbie Gaye, which was played by Alan Freed and secured Barbie Gaye a spot in his 1956 Christmas Show opening for Little Richard. In 1964, an Ernest Ranglin produced ska version of the she song became a multi-million seller for Jamaican teenager Millie Small and made producer Chris Blackwell rich, leading to further development of his Island Records label.
The other four current members - Carroll, Wade, Brooks, and Phillips - continued recording separately, later as Earl Carroll and the Cadillacs. Bailey's group also included former group saxophonist Jesse "Tex" Powell, and recorded in early 1958 as Jesse Powell and the Caddys. Both groups recorded simultaneously on Josie Records. Later in 1958, the groups combined back into one. Carroll's backup vocalists, Wade, Brooks, and Phillips, all decided to retire and Carroll joined Bailey, Drake, Martinez and Spencer. Carroll's lead spot had been given to Spencer and Bailey, and he left shortly thereafter, creating a new group, Speedo and the Pearls, which recorded briefly in 1959. In 1959, the Cadillacs are also featured in the movie Go Johnny, Go
The group split and re-formed in 1960, with Carroll, Martinez, Kirk Davis, and bass Ronnie Bright. Later the group was Carroll, Martinez, the returning Bobby Spencer, Milton Love, and Reggie Barnes. Martinez, Love and Barnes were all members of The Solitares at one time.
In 1961, the group began to resemble The Coasters in their music. The lineup shifted again, now with Carroll, Martinez, Curtis Williams, Ray Brewster, and Irving Lee Gail. Carroll was out by 1963 to enter the group they'd been emulating, The Coasters, with Carl Gardner, Billy Guy, and former Cadillac Ronnie Bright. 1963 also ended the group's run on Josie Records.
Brewster and Martinez brought in former members Bobby Spencer and J. R. Bailey and continued to record through 1963. The group split, with Bailey joining the Jive Five. Brewster brought in former Cadillac/Solitare Milton Love with Solitares Bobby Baylor and Fred Barksdale. This group recorded briefly in 1964. Spencer became lead vocalist, with Joey Levine (Ohio Express, Reunion) as backing vocalist, for Crazy Elephant, a bubblegum music group, in 1969.
The Cadillacs were back in 1970 with J. R. Bailey, Bobby Spencer, original member Bobby Phillips (who had retired from Speedo's group during the split), and new member Leroy Binns, of The Charts. Steven Brown later replaced Phillips. Teddy Pendergrass came on as the groups drummer. The group split into the mid 1970s and some members joined Herold Melvin and the Bluenotes, including Teddy Pendergrass as drummer. In 1979 Earl Carroll, Earl Wade, Bobby Phillips, and Johnny Brown came together for a Subaru commercial.

The Cadillacs - My Girl Friend 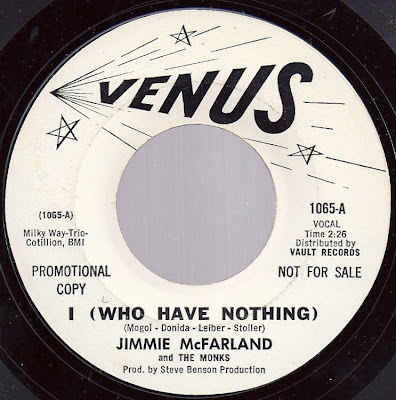 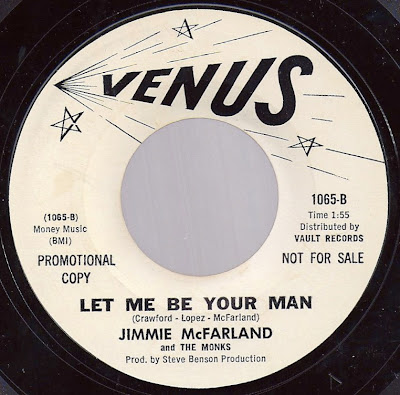 Scarce info is available on Mr. Jimmie McFarland but Venus records was a small label from 1966 distributed by VAULT Records...

I don't think i've heard a bad version of the tune I (WHO HAVE NOTHING) Written by: (Mogul, Donald, Leiber, Stoller) Produced by Steve Benson Productions.

LET ME BE YOUR MAN Written by:(Crawford, Lopez, McFarland) Produced by Steve Benson Productions. Cool little guitar break in this one.

If anyone has more info on Mr. McFarland please drop it! 'Till then enjoy this little promo record from 1966.

Jimmie McFarland and the Monks - I (Who Have Nothing)

Jimmie McFarland and the Monks - Let Me Be Your Man 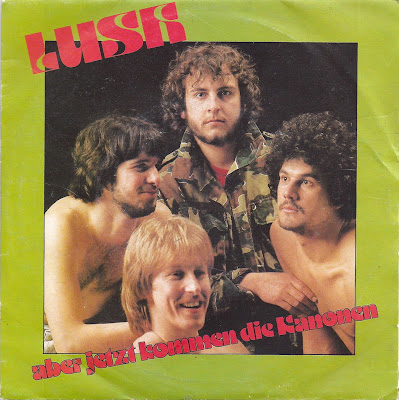 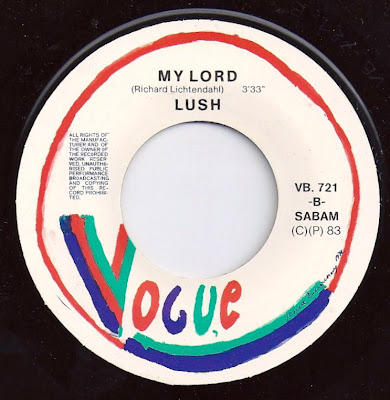 I picked this 45 up a while back having known nothing about it, but the shirtless goofy ass grins on these dudes (and one dude wearing camo) & the fact that it was cheap, made me pick it up. The interwebs say its from 1983 but it sounds much earlier than that to my ears. Vogue records was a Belgian branche of French label and distributor Disques Vogue, established in 1958 by taking over Belgian distributor Discovogue. After the bankruptcy in 1986, VB was bought by rackjobber Sonica and renamed into distribution firm Distrisound. As for the band itself, the limited stuff i can find is all written in Belgian/Dutch/French or whatever so I don't know what any of it means. And being the lazy dumb ignorant American i am, i do not have the moxy to put forth the effort to find out. 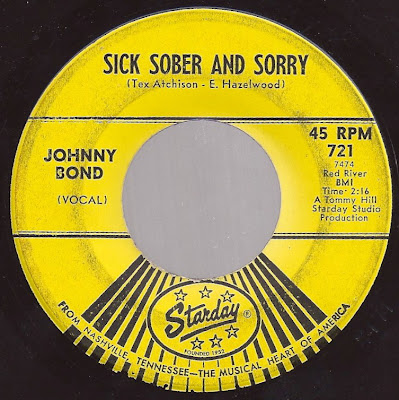 been down this road before.... a little drinking regret...

Johnny Bond - Sick Sober And Sorry
Posted by Devil Dick at 9:23 AM 5 comments: 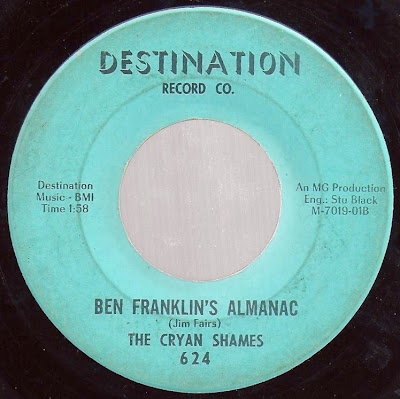 Killer FUZZ rockin' B-Side to "Sugar And Spice" on the Destination record label (before they were picked up by Columbia). June 1966!

Chicago's Cryan Shames found huge success from the A-side of this 45, "Sugar and Spice", but the flip "Ben Franklin's Almanac" is their finest garage moment and might surprise you. It has a fantastic guitar break too. The Destination label was also home to the Boyz excellent pop 45 "Come With Me".