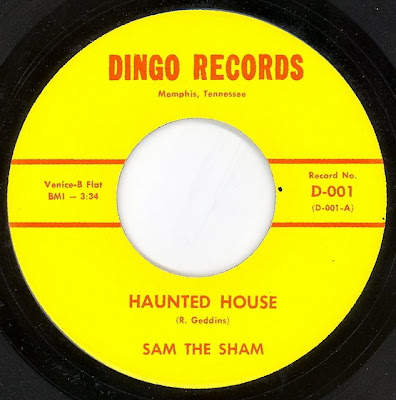 Before the Pharaoh's here is Sam The Sham's very 1st single.

Best known for their 1965 smash "Wooly Bully," which helped introduce Tex-Mex rhythms to mainstream rock & roll, Sam the Sham and the Pharaohs were formed in Dallas by lead singer Domingo Samudio, who took the name Sam the Sham from a joke about his inability as a vocalist. The Pharaohs consisted of guitarist Ray Stinnet, bassist David Martin, saxophonist Butch Gibson, and drummer Jerry Patterson. Before hitting it big with "Wooly Bully," a song about Samudio's cat, the band recorded the independent single "Haunted House," which helped them get a deal with MGM. Following "Wooly Bully," the group recorded a series of largely novelty singles, but only "Li'l Red Riding Hood" approached the success of its predecessor. Frustrated at being perceived as a talentless novelty act, Samudio broke up the Pharaohs in 1967 and recorded as the Sam the Sham Revue, and adopted the name Sam Domingo in 1970. His lone solo LP, Sam, Hard and Heavy, featured slide guitarist Duane Allman, but failed to establish him as a major talent. Samudio contributed two songs to the 1982 film The Border and later moved to Memphis and became a street preacher. "Wooly Bully," of course, remains a bar band staple. ~ Steve Huey, All Music Guide

Sam The Sham - Haunted House
Posted by Devil Dick at 12:09 AM

I found out about your site via various mixes that you have posted at Fufu Stew and Fleamarket Funk. Definitely top choice stuff that you have compiled. I really like the eclectic vibe you have on your blog. Everything from psych rock and funk to surf rock and halloween-themed tracks.

I have a little place on the blogosphere called Eclectic Grooves that features everything under the sun: funk, psych rock, blues, folk, world. You name it and I've probably heard of it or fetured it on my site. Recently, I've been doing weekly podcasts that have a new theme every week. Would you like to exchange links with me? I've already added yours to my blog. It would be great if you could do the same.

The one Sam the Sham-related thing I would mention here is the Tubes' track Theme From A Woolly Place, which has Woolly Bully going against Theme From A Summer Place.

Thanks for adding me to your links DD, and thanks for the shout on my blog. I imagine that there will be plenty of people who visit my site that will also dig yours.

I'm really diggin' your Halloween 45 posts. I'm hoping to post some on my blog as well. Thanks for sharing!!

Also, thanks for the link!!!

Thanks for this one - totally new to me.

Another Tubes connection! The Tubes did a country & western version of Haunted House live in 1978 when they did a radio broadcast from The Keystone club in Palo Alto, CA, disguised as a c&w cover band called "Cowboy Fee and The Heifer's Dream". I always wondered who did it originally! Woo-Hoo Good Stuff Here!!!!