Jimmy Cross - I Want My Baby Back 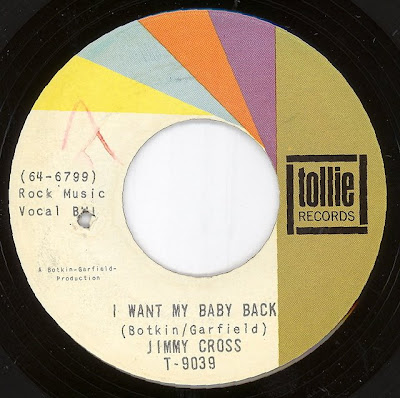 If the Teenage Death Song wasn't dead itself by 1965 — and it wasn't — it certainly wasn't because Jimmy Cross didn't do his darnedest to put the last few nails in its coffin, so to speak. A preposterously funny sendup of the genre in general and of "Leader of the Pack" and "Last Kiss" in particular, Cross' one chart record, written by Perry Botkin, Jr. and Gil Garfield, is impossible to describe without giving away the joke, but I assure you, he does get his baby back, one way or another. Putting a B-side on this would have been overkill, so flipping this disc will turn up something called "Play the Other Side", which is actually the instrumental track, sans vocals and sound effects — a cue to deejays worthy of Phil "Tedesco and Pitman" Spector himself. Cross went from here to something called "The Ballad of James Bong", a tall tale about pop stars based on...well, yeah, you got it.

Cool! This is a great song for Halloween, had a hard time finding it. 160kpbs...not bad either.