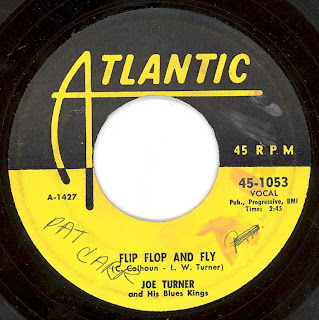 OK, so I aint been around much and I really don’t have much to say these days so I’ll just cut to the chase. Here is a great 45 from 1955 by a great artist; Big Joe Turner. I wish I had more records by him but then again I wish I had a lot of records I don’t have…

there is no need for me and my poor writing skills to try and do justice to the man just read the following lifted from the R&R hall of f(sh)ame...

Big Joe Turner (vocals; born May 18, 1911, died November 24, 1985)
Big Joe Turner was the brawny-voiced “Boss of the Blues.” He was among the first to mix R&B with boogie-woogie, resulting in jump blues - a style that presaged the birth of rock and roll. Indeed, Turner’s original recording of “Shake, Rattle and Roll,” cut for Atlantic Records in 1954, remains one of the cornerstones numbers of the rock and roll revolution. Turner’s lengthy career touched on most every significant development in popular music during this century, taking him from the big bands of the Swing Era to boogie-woogie, rhythm & blues, and rock and roll. James Austin of Rhino Records noted that “[Turner’s] raucous style first blended R&B with boogie-woogie. The result was jump blues, and Joe was its foremost practitioner.”

But how important was he to the development of rock and roll?

“Rock and roll would have never happened without him,” opined legendary songwriter Doc Pomus.

Turner was a huge man with a husky, booming voice who could out-shout a big band without amplification while projecting clarity and control. He was born in Kansas City, and it was in that freewheeling city’s jumping nightspots that he began his career as a bartender and singer. Kansas City was, in those days, a hotbed of jazz and blues whose many clubs rocked around the proverbial clock. As a young man, Turner worked at various of these joints - including the Backbiter’s Club and the Sunset Café - as a bouncer, bartender and singer. It was here that he hooked up with pianist Pete Johnson (nominally referred to in the songs “Roll ‘Em Pete” and “Johnson & Turner Blues"). Turner also sang with the big bands of Count Basie and Benny Moten when they came through town.

Turner and Johnson helped popularize boogie-woogie and jump blues in the late Thirties and early Forties. “Everybody was singing slow blues when I was young,” Turner told Rhino’s James Austin, “and I thought I’d put a beat to it and sing it uptempo.” Crowds would clamor for Johnson to play some boogie - “Roll ‘em, Pete!” Make ‘em jump!” - and he’d oblige. Thus did this duo help ignite a musical trend in the nightclubs of Kansas City and beyond. The songs Turner sang (and sometimes wrote) were often risqué, employing coy slang words and metaphors for sex in ways that would amuse a partying club crowd.

The duo brought their routine to New York in the late Thirties, and their appearance at the “Spirituals to Swing” concert in December 1938 proved to be a major turning point. Turner sang without a microphone, his forceful pipes carrying into the furthest reaches of the sold-out hall with ease. In New York, Turner and Johnson became regulars at the Cafe Society nightclub and signed to Vocalion Records, cutting some seminal versions of “Roll ‘Em Pete” and “Cherry Red” for the label.

Turner recorded prolifically in the Forties for various labels, including Decca, National and Aladdin. He worked with Johnson as well as a number of other pianists, including such giants as Albert Ammons, Willie “the Lion” Smith and Meade Lux Lewis. In 1946, Turner had his first R&B hit, “My Gal’s a Jockey,” released on Herb Abramson’s National label. Abramson would go on to co-found Atlantic Records with Ahmet Ertegun 1948. Meanwhile, Turner - who recorded for a bewildering variety of labels during this period - charted again in 1950 with “Still in the Dark,” issued on the Houston-based Freedom label.

In 1951, Ertegun brought Turner to Atlantic Records, where he cut a string of rhythm & blues and early rock & roll classics over the next decade. Among them were “Chains of Love,” “Sweet Sixteen,” “Honey Hush,” Shake, Rattle and Roll,” “Flip Flop and Fly,” and “Corrine Corinna.” Pianist Fats Domino accompanied Turner on the romping “TV Mama.” “Shake, Rattle and Roll” and “Honey Hush” were particularly massive hits, topping the R&B charts for three and eight weeks, respectively. For a spell Turner was a bonafide rock and roll star, cutting such songs as “Teenage Letter” for the burgeoning youth market and appearing in the teen flick Shake, Rattle and Rock. No other figure straddled rock and roll and rhythm & blues with such authority as Turner. Capitalizing on his reputation as a pioneer, Turner shuttled easily between the two worlds, sharing stages with Fats Domino, the Clovers, Bo Diddley and a variety of other acts on Alan Freed’s package tours.

But Turner’s musical roots were too deep to limit him to the faddish teen market. Turner’s definitive work for Atlantic came in 1956, and the title said it all: The Boss of the Blues: Joe Turner Sings Kansas City Jazz. A sequel of sorts, Big Joe Rides Again, appeared in 1960. In the Sixties, after the first wave of rock and roll had died down, Turner returned to blues and boogie-woogie. He moved to Los Angeles, where he recorded with jazz legends like Dizzy Gillespie, Count Basie and Roy Eldridge for some well-received albums on the Pablo label. He also schooled a young backup band that eventually became the Blasters. 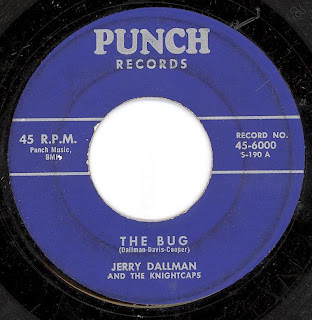 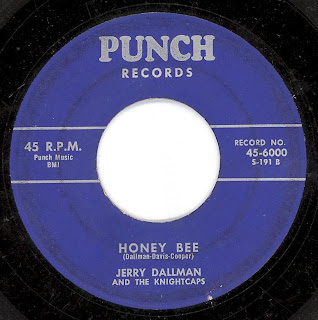 I aint been around the interweb world much lately. You know how life is...?
The best laid plans of mice and men and all that... Anyway...
Here is a obscure rockabilly single from 1958 that got a huge shot in the arm when John Waters used it in the finale of his film Hairspray. However, Honey Bee is the better track with a good guitar break.
Don't know when or how often i will be back on here but until the next time enjoy!
Jerry Dallman and the Knightcaps - The Bug
Jerry Dallman and the Knightcaps - Honey Bee
Posted by Devil Dick at 9:10 AM 12 comments: