Moontrekkers - Night Of The Vampire 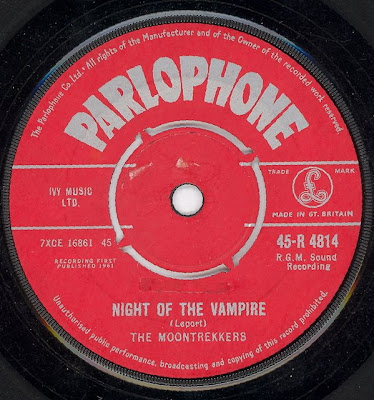 Here is one of my all time fave instrumental cuts, Halloween related or otherwise.

This songs is just plain great, the guitar and organ interplay is just plain wicked and creepy, the reverb overload just adds to the tension. the screams and backward tape masking add an additional creep factor and the overall groove and beat kind of sounds like floorboards creaking... I would imagine the Moontrekkers are English as I've never seen an non British pressing of this 45. This is a Joe Meek production of Telstar fame, who it is told had an obsession with the occult. Other than that i don't know much about the moontrekkers. anyone have any additional info? Was Joe meek a member of the band? Looks like they cut more singles which i certainly have to track down. Apparently this cut was also banned in the UK at the time of its release, who knew the Brits could be so creepy in a Halloween sort of way.

Moontrekkers - Night Of The Vampire
Posted by Devil Dick at 10:24 AM

This really has been an awesome display of ghoul-itude...

if you send me yr e-mail address I can send the follow up Return Of The Vampire as an mp3...I'm @ the address below---

I blogged this one myself the other week over at http://deniniquitysden.blogspot.com. Great tune!

Thanks for making my day. This is so g-g-good

The Moontrekkers were originally known as the Raiders, they were Gary LePort- guitar, Jimmy Raither-guitar, Peter Johson- bass and Tony White- drums, Meek changed their name and made them add Peter Knight on keyboards. Knight wrote Night Of The Vampire. There is some dispute over this but it is said Rod Stewart was part of the band when the auditioned for Meek and that Meek loved the band but hated the singer. Night Of The Vampire has the clavoline sound on it way before it became famous as the lead instrument on Telstar. Eventually LePort quite in a power struggle with Knight who became the group's leader. They cut several more singles with Meek including Return Of The Vampire, Melodie D'Amour, There's Something At The Bottom Of The Well, and John Brown's Body.
Their final single Moondust saw them move from Parlaphone to Decca, it went to #5 in Sweden. They broke up shortly after that disc (August, '63). They also left some un-issued tracks behind, some of them show up on the CD Intergalactic Instros, part of the Joe Meek Collection series (I'm not sure how many Volumes it's up to, there's at least 20 in my collection).

always nice to have the hound drop some knowledge!

As far as I know, it was Gary LePort who wrote Night Of The Vampire. It's certainly his publishers you have to pay royalties to when you record a version of the tune (I've don it twice).