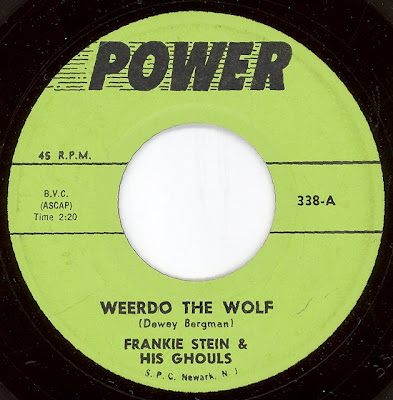 The Frankie Stein and the Ghouls records are legendary among Halloween geeks but here's a 45 you don't see all that often... This was released with a picture sleeve back in the day but mine in missing.... :(

But who was Frankie Stein???

The flip to this 45 GOON RIVER was written by Joe Thomas, and WEERDO THE WOLF is credited to Dewey Bergman. So who really was Frankie Stein...???

Frankie Stein & His Ghouls - Weerdo The Wolf
Posted by Devil Dick at 12:05 AM

This is an old post, and you might not see this comment, but I'll add it anyway: The "SPC" at the bottom of the label is "Synthetic Plastics Corp" of Newark, NJ whose [infamous] budget labels included: Spin-O-Rama, Diplomat, a number of children's labels, as well as many others (and I mean many). They also had a hand in other budget labels (like Premier & Coronet) and handled the LP pressing for some of the smaller NYC-based pop labels (like Jubilee-Josie) -- you can usually tell by the small-sized label on the LP. None of their "rock & roll" output had any union session people.
Seeing this 45 was a surprise, I'd only heard about them; so, thanks a lot for it [It might have been marketed in the same Point-Of-Purchase rack as their kiddie 45s].
By the way, I just happened upon your blog recently, and I have been enjoying it tremendously. Thanks again.
KL from Brooklyn, NY

hey many thanks for the share KL! glad your diggin' the tunes!
dd

Can't thank you enough for all these great Halloween tunes - thanks for taking the time to share your collection! :)

ha ha, i didn't know anyone else had this 45. i named this type of record "ghoul group", you can see pics of some of mine on rcg under this title. best -- wurlitzer