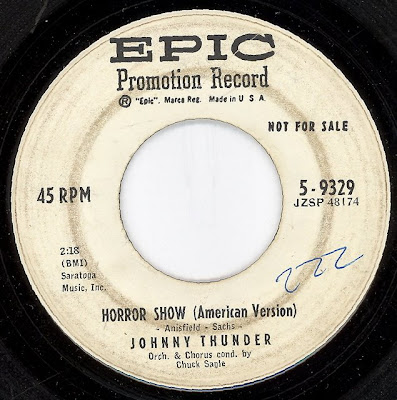 Not to be mistaken for Dead Punk Rock Icon and all around New York Doll Junkie Guitar God Johnny Thunders with an "S".

But Still I'm not even sure if this is "THAT" Johnny Thunder below because it doesn't state that he cut sides for Epic but keeping in the Halloween spirit here is "A" Johnny Thunder doing another kooky spooky "Horror" 45 side.

In 1963, Johnny Thunder, born Gil Hamilton, scored the only hit of his career. "Loop de Loop" was essentially a nursery rhyme set to music. The public loved it, and it assailed to the lofty perch of number four on the pop charts. Only "Hey Paula" at number one, "Walk Right In," and Bobby Vee's "The Night Has a Thousand Eyes" at number three, prevented it from being the top record during the week of February 9, 1963.

Born August 15, 1941, in Leesburg, FL, Johnny Thunder started singing in church, high school, and on street corners. Nothing was happening in Florida in the late '50s, so Thunder moved to New York City under the advice of a friend who worked as the road manager for the Drifters. Thunder even sung with the famous Atlantic Record group for a few months prior to Ben E. King leaving to go solo. After the stint, he started recording under his birth name for Capitol and Fury Records, but had no success. To keep the rent paid and food in his belly, he made his self useful as a studio background vocalist working with then-unknowns Dionne Warwick, Luther Vandross, Cissy Houston, and others. Thunder's high mellow resonant tenor always lifted him above the others. One of his Capitol releases was "Tell Him," the same song which became a hit for the Exciters months after his version had died. (The Exciters' members included the boisterous voice of Brenda Reid, who's the mother of Antonio "L.A." Reid, who became a songwriting and record producing force with Babyface in the '80s and '90s.)

Producer/songwriter Teddy Vann came up with "Loop de Loop," a song that Thunder thought was a joke. Vann even suggested the name change from Gil Hamilton to Johnny Thunder. None of his following releases came close to equaling the success of "Loop": "The Rosey Dance" failed to enter the Top 100, stopping at number 122; Bert Bern's "Everybody Do the Sloopy" did much better, but its showing at number 67 was still unimpressive. Like most singers, Thunder didn't like the stuff he recorded, but did it hoping lightening would strike twice. He continued recording throughout the '60s, waxing sides for Calla, Vee Jay, and United Artists Records; the Vee Jay 45 dropped under his birth name. In the '70s, he recorded sides for Arista, but again, no hits. He recorded one album, Loop de Loop, on Diamond.
Biography by Andrew Hamilton - Allmusic.com

Johnny Thunder - Horror Show
Posted by Devil Dick at 12:09 AM

It doesn't sound like the Johnny Thunder who made Loop de Loop to me but who knows, anyone can impersonate Boris Karloff to some degree. Here's a great one by the aforementioned Thunder on the Calla label, produced by Tommy James-- I'm Alive, one of my all time favorite psychedelic rockers--
http://mac.easthouston.net/thehound/19870606/mp3s/start21.mp3

i didn't think it was the same thunder...

& thanks for the link hound, gonna check it now!

Great site and thanx for the music..

I was wondering if you could email me Horror Show / Johnny Thunder..I used to have this 45 but can't seem to find it anywhere.

If not it's no big deal...
Thanx anyway

The file has been disabled by Divishare - chance of a repost?