Hutch Davie - Gwendolyn and the Werewolf 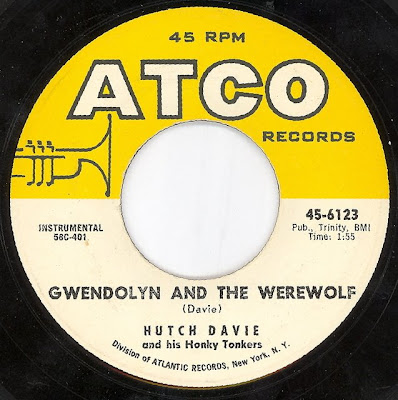 Here is Hutch Davie and his Honky Tonkers on Atco from 1958 doing a really moving piano & sax rocker full of maniacal laughter & screams!

Here's the skinny on Mr. Davie:

Working with producer Bob Crewe, Hutch Davie provided the arrangements for such best-selling rock singles as Santo and Johnny's "Sleepwalk", in 1957, and the Angels' "My Boyfriend's Back" in 1962. A top-notch producer, Davie oversaw recordings by Shirley Ellis, Patty Duke, Leslie Gore, Ellie Greenwich and Frankie Valli and the Four Seasons. Davie was nominated for a Grammy award for his arranging of the Bob Crewe Generation's 1967 album, Music To Watch Girls By.

A skilled pianist, Davie was co-writer and played piano on Jim Scott's novelty hit, "Green Door", in 1956. He recorded interpretations of jazz standards, including "Woodchopper's Ball", "Sweet Georgia Brown" and "Glow Worm", with his band, the Honky Tonkers, and an album, Piano Memories featuring his solo playing.

Davie's most enduring work came as a songwriter and arranger. He served a stint as staff songwriter for Trinity Music, in New York's Brill Building and wrote for the Canadian-American, Congress and Caprice labels.
Biography by Craig Harris


Hutch Davie - Gwendolyn and the Werewolf
Posted by Devil Dick at 12:01 AM

Can't beat that ATCO label - had some great acts on there

Do you mean Jim Lowe's version of Green Door on Dot? I don't think Little Jimmy Scott ever got to that one.

The ironic thing is that ole' devil can't even jump all over it because he is too busy watchin' 'Project Runway!

Oh, and I got pimped on that copy of 'VooDoo Walk' by some hombre named 'Pappy'. Deja Vu!

ya'll don't be needin' to tell the whole world bouts what the devil be a watchin'!!!!!!!

Hutch Davie did all the great orchestration for the Linda Scott records in the early 60s on Canadian-American. There were a bunch of 'em: I've Told Every Little Star, Don't Bet Money Honey, Count Every Star and a few more. 'n far as what that Devil Dick is watchin... "Great googley moogley... get me outta here!"
Regards Guyz-
Mike

12/8/10
RobGems.ca wrote:
Hutch Davie was born Bob Davie & was sometimes credited on some labels (Canadian-American, Caprice, etc.) with a diamond-shaped logo as Hutch "BUN" Davie. He did many great arrangements during the 1950's-1970's, but he also did some infamous ones too. Some of the most infamous arrangements were the entire 1967 LP by Mitch Ryder after Bob Crewe made him seperate from the Detroit Wheels. That LP was titled "What Now My Love" (Dyno Voice#31901/9101). Side Two consists of typically arranged "Detroit Wheels" like rock with Davie's Vegas-y Big-Band & Gospel Chorus Call & respond arrangements. Side One. on the other hand consists of Preposterisouly arranged pop dreck that Crewe wanted him to try out to become a more "Serious" artist. It was laughable at best, horribly trite at worst, & to this day Mitch Ryder states in intervierws how much he loathed that album & broke off with Bob Crewe , never speking to him again after that fiasco. Mr. Davie also did pop arrangements for the late folk/pop singer William "Oliver" swofford & his 3 big top 40 hits, "Good Morning Starshine", "Jesn", & "Sunday Morning", all released in 1969.