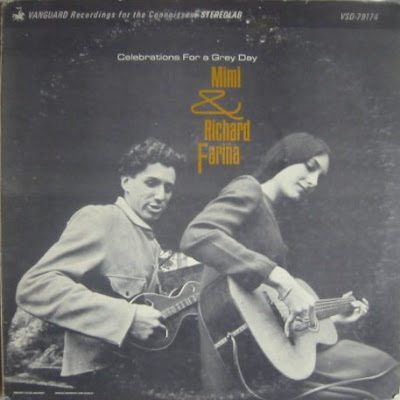 A little something different here today, some hippy folk rock via 1965 on Vanguard from Mimi & Richard Fariña.

"Reno Nevada" & "One Way Ticket" are pretty cool rockers with a real 60's vibe, dig Mimi humming behind Richard singing in Reno, while "Celebration For A GreY Day" is an pretty psychedelic instrumental jam that borrows from some very famous melodies.

Here is the straighht dope:

Richard George Fariña ( March 8, 1937 – April 30, 1966 ) was an American writer and folksinger. He was a figure in both the counterculture scene of the early- to mid-sixties as well as the budding folk rock scene of the same era.

Fariña was born in Brooklyn, New York, of Cuban and Irish descent. He grew up in the Flatbush neighborhood of Brooklyn and attended Brooklyn Technical High School. He earned an academic scholarship to Cornell University, starting as an Engineering major, but later switching to English. While at Cornell he published short stories for some of the local literary magazines as well as for magazines such as The Transatlantic Review and Mademoiselle. Fariña became close friends with Thomas Pynchon and Peter Yarrow while at Cornell. He was suspended for alleged participation in a student demonstration against repressive campus regulations, and though he returned to campus, he ultimately dropped out just before graduation in 1959.

Back in New York City, Fariña wrote and mixed with the bohemians at the White Horse Tavern, the legendary Greenwich Village haunt frequented by poets, artists, folksingers, and wayfarers, where he befriended Tommy Makem. It was there that he met Carolyn Hester, a successful folk singer. They had a whirlwind courtship and married eighteen days later. Fariña appointed himself Hester's agent; they toured worldwide while Fariña worked on his novel and Carolyn performed gigs. Fariña was present when Hester recorded her third album at Columbia studios in September 1961, where a then-unknown Bob Dylan played harmonica on several tracks. Fariña became a close friend of Dylan's; their friendship is a central topic of David Hajdu's Pulitzer Prize-winning book Positively 4th Street.

In Europe, Fariña met Mimi Baez, the teenage sister of Joan Baez in the spring of 1962. Hester divorced Fariña shortly thereafter, and Fariña married 17-year-old Mimi in April 1963. They moved to a tiny cabin in Carmel, California, where they composed songs on a guitar and appalachian dulcimer. They debuted their act as "Richard & Mimi Fariña" at the Big Sur Folk Festival in 1964 and were signed to Vanguard Records. They recorded their first album, Celebrations For a Grey Day, with the help of Bruce Langhorne, who had previously played for Dylan. Due to his short life, Fariña's musical output was limited. The Fariñas released three albums, one posthumously. Fariña, like Dylan and others of this time, was considered a protest singer, and a number of his songs are overtly political. Several critics have considered Fariña to be one of the top talents to emerge from the 1960s Greenwich Village folk music scene. ("If Richard had survived that motorcycle accident, he would have easily given Dylan a run for his money." -- Ed Ward). His best-known songs are "Pack Up Your Sorrows" and "Birmingham Sunday", the latter of which was recorded by Joan Baez and has become more well-known after it became the theme song to Spike Lee's 4 Little Girls, a documentary about the 1963 16th Street Baptist Church bombing in Alabama.

At the time of his death, Fariña was also producing an album for his sister-in-law, Joan (which Baez would ultimately not release, though two of the songs were included on Fariña's posthumous album, and another, a cover of Farina's "Pack up Your Sorrows", co-written by Fariña with the third Baez sister, Pauline Marden, was released as a single in 1966).

Several of his songs were recorded by Fairport Convention in the UK, typically "Reno, Nevada" and "The Quiet Joys of Brotherhood".

Fariña is also known for his novel Been Down So Long It Looks Like Up to Me (originally published by Random House in 1966). The novel, based largely on his college experiences and travels, is a comic picaresque story of Gnossos Pappadopoulis. It takes place in the American West, in Cuba during the Cuban Revolution, and at an upstate New York university. The book has become something of a cult classic among those who follow sixties and counterculture literature. Thomas Pynchon, who later dedicated his most well-known book Gravity's Rainbow (1973) to his friend, described Fariña's novel as "coming on like the Hallelujah Chorus done by 200 kazoo players with perfect pitch... hilarious, chilling, sexy, profound, maniacal, beautiful and outrageous all at the same time." Pynchon also wrote an introduction to a recent paperback version of Been Down So Long It Looks Like Up to Me. A movie was made of the book in 1971.

On April 30, 1966, two days after the publication of his book, Fariña attended a book-signing at a Carmel Valley Village bookstore, the Thunderbird. Later that day, while at a party to celebrate Mimi's 21st birthday, Fariña saw a guest with a motorcycle and hitched a ride up Carmel Valley Road east toward Cachagua. The bike crashed within a mile or so. According to Pynchon's preface to Been Down..., the police said the motorcycle must have been traveling at 90 miles per hour, even though "a prudent speed" would have been 30 miles per hour. He was thrown from the back of the bike and killed instantly.

The world has gone upside down. Next thing you know the United States will elect a black president...

FYI, we have a cat named Mimi!

I love their stuff. Fairport Convention did a nice cover of 'Reno Nevada' for the BBC in 1968.

Tommy... how do I put on that hit counter thingy?... everything I try... well it doesnt work?

I've long been fond of this number, and especially this version.

I have to wonder though, with the lyrical theme of this song, whether it bore some influence on the third verse of Steely Dan's 1972 hit "Do It Again" (from their debut LP Can't Buy A Thrill)?