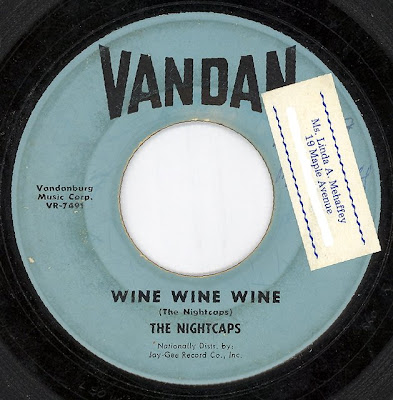 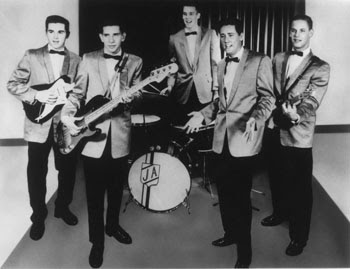 For this post I'd like to Thank Linda A Mahaffey, who's city, state & zip code i blocked out on her address label. If she hadn't bought this 45 so many years ago it might not have made it into my hands. Any way this is something I've been doing a little bit of over the weekend with some good friends and the JJB, drinking a little wine, wine, wine...
THE NIGHTCAPS, one of the first widely known white blues bands, were formed by high school friends Billy Joe Shine (vocals), David Swartz (guitar), Jack Allday (drums), Mario Daboub (bass) and Gene Haufler (rhythm guitar) in 1958. Over the years they became fixtures on their local Dallas, Texas blues scene, greatly influencing the blues and R&B acts that subsequently prospered in the region. As well as performing blues standards such as Muddy Waters' "I've Got My Mojo Working" and Junior Parker's "Next Time You See Me", The Nightcaps wrote several affecting originals. The most noteworthy of these were the singles "Thunderbird" and "Wine, Wine, Wine". "Thunderbird" was later covered by devotees ZZ Top early in their career. During this period, they became a major influence on such future luminaries as Jimmie Vaughan -- who apparently learned every song off the Nightcaps' LP -- and his younger brother, Stevie Ray Vaughan, who thought Wine, Wine, Wine was just a great record, and ZZ Top. Vaughan would later record "Thunderbird," and ZZ Top used it to open their Fandango album. Billy Joe Shine still leads a revival version of the band in the Dallas area with Lead Guitarist(an original Nightcap)Gene Haufler, along with Len Mills on Rhythm Guitar and Keyboard, and brother Dennis Mills on Bass, Mark Minton on Drums, and Richard Williams on Saxophone.

Hit the Stomp for a West Texas serving of "Wine".

I love your blog!!! You always dig up some really great 45s. Keep up the good work!

This is a really fun song. LOL.