Mashmakhan - As The Years Go By - Days When We Are Free 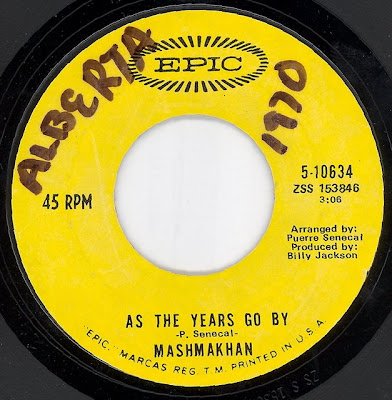 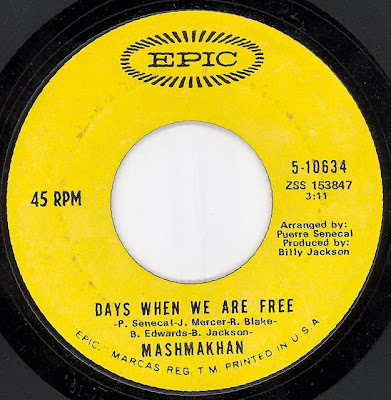 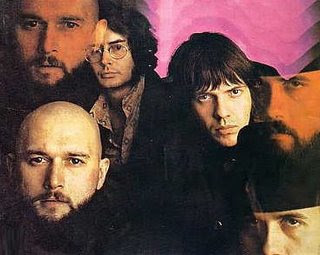 Gonna stick w/ the rock here and while this is not as muscular as the past few post this proggy goodness still rocks, the Mash stretch out a bit more than the last 2 45's but there is a certian cool flavor found in this product of the Great White North...

Sending this one one out to The Red Boy and his American hating brother...

Mashmakhan was a Canadian rock fusion band that was most active in the early 1970s, and is best known for their hit single "As The Years Go By."

Members Pierre Senecal, Brian Edwards and Rayburn Blake first met in 1960 in Montreal. Their drummer did not show up one night for a gig, so Jerry Mercer was brought in and ended up joining the band. Edwards quit shortly thereafter, but the other three continued to perform on the local scene under names like the Phantoms, Ray Blake's Combo and the Dominoes.

By 1965 they were calling themselves The Triangle, and backing up local R&B singer Trevor Payne. They backed up Payne for four years until being discovered by record producer Bob Hahn, who helped them get signed with Columbia Records in Toronto. Edwards rejoined the band and they changed their name to Mashmakhan. This name is a reference to Michoacan, a region in Mexico famous at the time for its high grade marijuana.

Senecal's song "As The Years Go By" was released off the debut album in an edited form, and was the group's first hit; it sold 100,000 copies in Canada and 500,000 copies in the United States (on the Epic label). The band actually wrote the song as a novelty addition to their album, not expecting it to gain serious recognition. The single also sold 399,000 copies in Japan. The two follow-up singles were "Gladwyn" and "Days When We Are Free".

In 1971, Mashmakhan was one of two contributors to the musical score of the NFB film Epilogue/Fieve, which was directed by William Pettigrew. "Couldn't Find the Sun", written by Rayburn Blake for the movie, was included on Mashmakhan's 1971 album The Family. This album also did well in Japan, but the band realized little domestic success and split up shortly thereafter.

Mashmakhan later experienced significant renewed interest with the release of the film Festival Express, which featured color film of the band performing two songs (one song appears in the movie, one song appears in the DVD extras) during the Festival Express concerts in Canada in 1970. Several cameras provide multiple angle views of the band, and the audio recordings of the live performance are synchronized to the performance film. The Festival Express footage was captured using advanced recording devices for the time, and the resultant audio and video quality is relatively high. The band's performances in the film are powerful, creative, and exciting; Mashmakhan is perhaps most accurately termed a jazz fusion band in terms of the character of their performances.

Mashmakhan - As The Years Go By

Mashmakhan - Days When We Are Free
Posted by Devil Dick at 12:05 AM

One of teh Festival Express tunes is a smoking version of 'Coming Home Baby' which features some great organ work. If you haven't seen the film, rent it because it has some great stuff in it.

man oh MAN...
there is NO shortage of prog, fusion and other masturbatory forms of "music" up here!!!
Everyone needs to play as many notes as humanly possible just to stay warm!

you've been postin' some KILLER STUFF!!!

For the record...
I don't hate America.
I hate it's passive de-evolution and
I hate what it's become.

Promise me y'all will let me know
when the gauntlet is dropped...
I'll be RIGHT down!

I guess I should register so's I don't look like one of those anonymous cowards!

does anyone have mashmarhams 'ride johnny, ride as a mp3 and if so can i have a copy?
mbhill@gmail.com

great band and single my man! found this awhile back; some fine Canadian prog