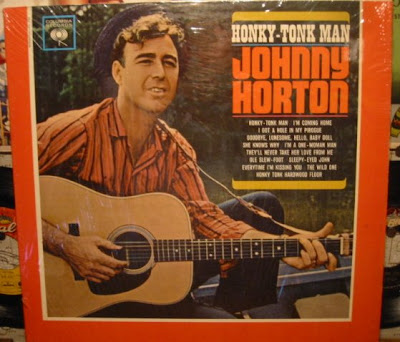 OK, breaking away from the news of the world here is a real fire cracker of a cut from 1958 from Johnny Horton and a record the devil has been looking for on 45 for a good long while now, so when i saw this nice lp copy still in the shrink for a mere 6 bucks i couldn't resist.

This is a really rockin' rockabilly rocker that really rocks! I suppose most folks now his more country ballad hits like "The Battle of New Orleans" which won the 1960 Grammy Award for Best Country & Western Recording. The song won the Grammy Hall of Fame Award and in 2001 was named number 333 of the Songs of the Century. In 1960, Horton had two other crossover hits with "Sink the Bismarck" and "North to Alaska". But before all that nonsense he was a rockin'!

Born in 1925 he died on November 5, 1960, Horton was killed instantly in a head-on collision with a drunk driver on Highway 79 at Milano, Texas while he was returning home from a performance at the Skyline Club in Austin.

Some odd notes worth mentioning:

# Johnny Horton reportedly had experienced premonitions several months before his own death about the possibility of dying in a car crash caused by a drunk driver. He always said that if he was in a head-on situation to drive into the ditch. His accident took place on a bridge so there was no ditch for which to head.

# Both Horton and Hank Williams were married to the same woman at the time of their death, and played their last shows at the Skyline Club in Austin, Texas.

# Both Horton and Hank Williams died in Cadillacs.

# Johnny and the Rowley Trio, (Jerry, Evelyn, and Vera), were returning from a performance when they heard over the radio about the death of Hank Williams. They were on Highway 79 going through the town of Milano, Texas — the same town where Johnny would lose his life seven years later.

But don't let that death stuff stop from from a boppin' & a tappin' yer feet to this country fried rocker!

So much of what you have up here on your first page is completely new to me, that it seems kind of futile to zero in on any one post - I settled on Ed Horton almost at random.

Thanks for posting this - and a great bit o'trivia, never heard that story before.

Hank Williams told Billie Jean (Johnny's and Hank's Widow) that she would be married to Johnny one day. this happened backstage at the Hayride just before Hank's death.

His "I'm Comin Home" and "Woman I Need" are KILLER! Primal rockabilly.

Kay Starr did the original version. It was a bit slower but had that twang that said, "Honky Tonk." Wish I still had it. It might be on the hard drive on my MAC which, unfortunately, is drawing a blank ATM. Johnny's is plenty good though. Nice listening ... thank you.

Hi-great article-but Horton was not killed instantly as you stated-he actually was pulled from the wreckage alive and died on the 18 mile trip to the hospital.