Alvin Cash & the Registers - Philly Freeze - No Deposit - No Return 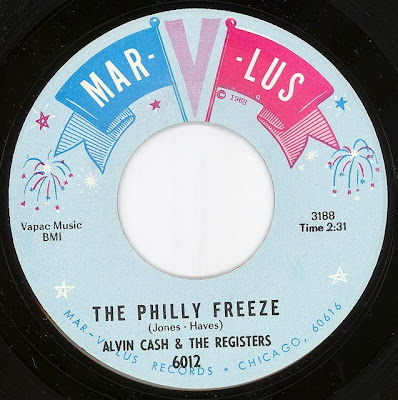 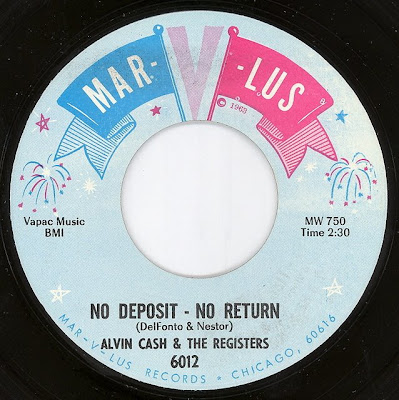 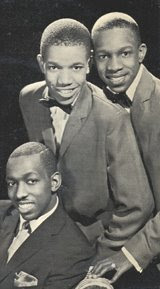 I'm sending this one out to my lil' Phillie from Philly!

2 Great funky soul cuts from Alvin Cash & the Registers on Mar-V-Lus from the year i was born:

Alvin Cash (born Alvin Welch, February 15, 1939, St. Louis, Missouri - died November 21, 1999) was an American pop singer. A graduate of St. Louis's Summers High (also attended by Luther Ingram, Billy Davis, and Anna Mae Bullock [better known as Tina Turner]), Alvin and three brothers moved to Chicago, where they sang and danced while in search of a recording contract. Andre Williams saw them perform (as The Crawlers) and had them record a tune, "Twine Time", which was a rewrite of Williams' 1957 hit song "Bacon Fat". The tune became a pop hit in 1965, and while "The Crawlers" proper, i.e. Alvin's brothers, probably did not play on the track, backing band The Nightliters did.

Soon after the success of the single, The Nightliters changed their name to The Crawlers and began touring with Cash; they would later change names again to The Registers. He went solo after a few further singles, and recorded a full-length LP tribute to Muhammad Ali; he also acted in several blaxploitation films, such as Petey Wheatstraw and Black Jack. He continued performing in the Chicago area into the 1990s, and died from ulcer complications in 1999.

He was in Petey Wheatstraw? Damn! I think J.Geils covered Philly Freeze in the early days.

I've never run across an Alvin Cash record that wasn't worth owning.

Keep on Dancin' is my shit though...

What's not to like about Alvin Cash? Cool. Thanks.

The High School he went to was Sumner