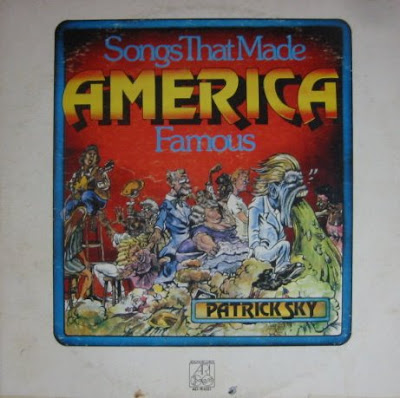 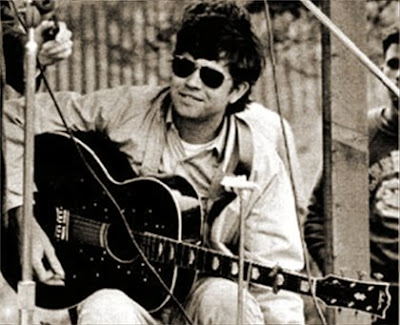 Something a little different here today and something i don't think I've touched on before; Some comedy based satire music from Patrick Sky. After all this an "eclectic" blog. Anywho, here's a couple oddball tunes to get yer week started.
Patrick Sky, born Patrick Lynch in Georgia in 1940, is a musician, singer and songwriter of Irish and Native American (Creek Indian) ancestry. A contemporary of Bob Dylan and others in the Greenwich Village folk boom of the 1960s, following military service Sky released a number of well received albums from 1965 onwards and played with many of the leading performers of the period, particularly Buffy Sainte-Marie, Eric Andersen and the blues singer Mississippi John Hurt. Sky's song Many A Mile became a folk club staple, and has been recorded by Sainte-Marie and others.

Becoming increasingly disillusioned with the music business and politically radical, Sky released the controversial and scabrously satirical Songs That Made America Famous in 1973 (the album was recorded in 1971 but rejected by several record companies before it found a home); to this day he claims to have received no royalties for the album. This album featured the earlier known recorded version of the song Luang Prabang, written by Sky's friend Dave Van Ronk. Following its mixed reception (some critics found it obscene), Sky gradually moved into the field of Irish traditional music, founding Green Linnet Records in 1973. Today he is recognised as an expert in building and playing the Irish uillean pipes, often performing with his wife Cathy. He has also published several books on the subject.

i love dave van ronk. Sunday street as the opener for Idiot's delight from when i was a kid. If I ever did decide to get married, that would be the song i'd dance to with my father.

Great post, I hadn't heard this years. I was never a folkie, but a friend introduced me to Sky about 30 years ago and I can still sing Luang Prabang to this day. Not like his other LPs, I thought this was a great comdeic F.Y., a joke that too many didn't get. You could get a sense of his humor coming though, on one album with Mississippi John Hurt they 'sing' Gilbert & Sullivan for all of 15 seconds.

Sky himself supports free downloading of music. So share away!

I saw Patrick Sky twice in N.Y. in '72. Once in an old church in Greenwich Village that had velvet cushioned pews. When you sat down, a cloud of dust spread around you. He performed quite a few of the songs off this album, which was released a short time later. His performances of the songs featured some different lyrics and were a lot better (funnier) than the versions released on the album. His sense of humour onstage at the time reminds me a little of early Leo Kottke. I had the first 2 albums on Vanguard that I liked alot as a teenager, and another one on another label that came out later, (I can't remember the name of it). Thanks for posting the songs.