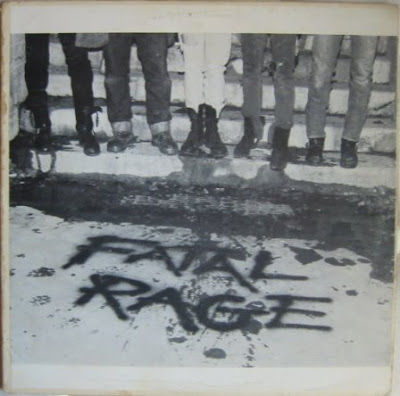 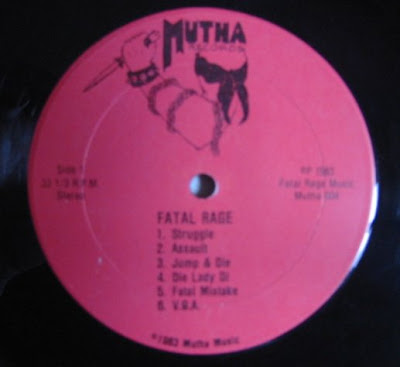 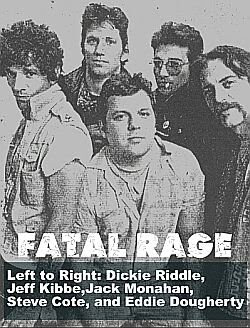 Ok, totally switching ears here from my Halloween month (i hope some of you enjoyed that?) I am back to some home spun New Jersey hardcore punk from 1983 with another Mutha records cult classic!

Formed in 1981, FATAL RAGE was the hardest, fastest, and most outrageous of the "Shorecore" bands. Fronted by the outspoken Jack Monahan (Jacko), the RAGE soon got a reputation for wild performances and terrorizing unsuspecting clubs with performances that immediately turned into nonstop slamfests. They had no problem finding an audience - the problem was finding a place to play as they were banned from all the Jersey clubs.

The 1st few Mutha releases are in my opining the 1st and finest of all the NJHC records and this is no exception. Not only do i have to credit bands like Fatal Rage as an influence but even more importantly lead singer Jacko Monohan, later of Dirge, in particular who I've known now for well over 20 years now.

Jack has been a important part of the NJ scene from way back in the day as he has booked shows at The Brighton Bar in Long Branch, among other places for as long i can remember and back in the day would even make road trips with my shitty hardcore band Social Decay to CT and Boston. He's been a great friend, that's not to say we have not had or problems over the years but anyway...

This is an absolute must for NJ HC fans or hardcore fans in general and has been lost for way to many years!

Also: Big Ups to Last days Of man On Earth for the great post about jersey hardcore & punk over there...

Dang! I actually saw Jacko over the summer at a Chinese Buffet in Eatontown. It took me a few seconds to recognize him. Like the rest of us, he's old now.

yeah larry, time is a mutha!

I'm goin crazy over these bands! Thanx for sharing DD. BTW I've been looking for "My Three Sons" I've heard them on the "NJ's Got IT" compilation...Do you have any information, or anything else? >>> Signed: The Sgt.

sgt, i have the my three sons 7 inch!

Thank you for this post. I spent alot of time hanging out at the Brighton and BSing with Jack during my college years. Speaking of it's local labels and New Jersey, would love to see you post Deathrage's Demo "Murdering The Brady Bunch" and Children in Adult Jails LPs.

Really Cool post bro!, thanks a ton!
You have great bands here!

You have the drummer from your photo incorrect! The man in the mustache to the right is my DAD, Ed Dougherty, and he was the drummer on the LP cover you are showing!