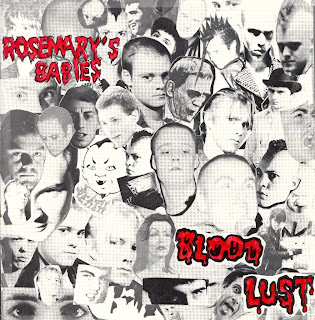 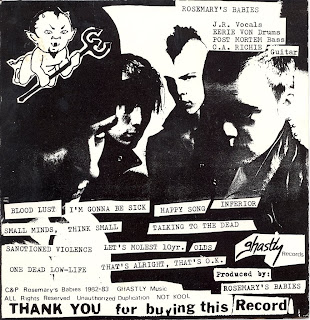 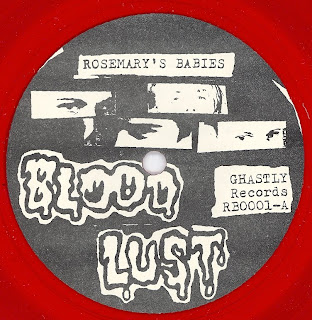 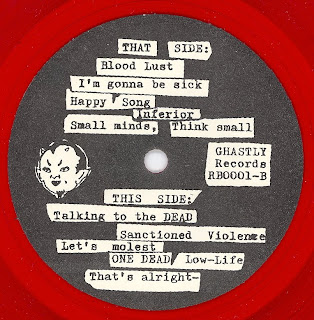 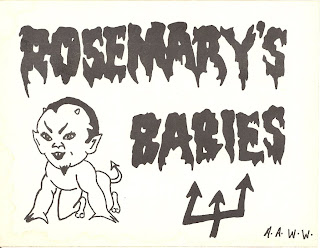 OK one more Red Boy shout out this week and then I think I'll be done talking to him for the next month! Here ya go ya skinny legged prick!

In my never ending quest to find all thing Jersey here is one that had eluded me for a long while but i finally tracked it down and now for those that give a shit, i now give it to you.

Rosemary's Babies - Bloodlust is a fairly decent NJHC record but i guess the reason this has become sort of sought after is the fact that Eerie Von, who later went on to play w/ Danzing was a member. Misfits freaks who have to have all things Misfit take note.

The band's early musical influences included The Misfits, and DC bands such as Minor Threat, The Bad Brains, and State of Alert (featuring vocalist Henry Rollins) as well as early British Oi! bands like Blitz, Charged GBH and Discharge. Other stylistic influences include films such as A Clockwork Orange and Caligula.

Rosemary's Babies was notably active in the New Jersey and New York hardcore punk scenes of the early 80's, and all band members continued to work in the music industry after the demise of the band. Eerie Von moved on to work with Glenn Danzig in the bands Samhain and Danzig.

I was a Misfits fan way before the lame-ass Jerry Only version came about,but never got around to tracking this down for a listen. Thanks for posting but if anyone pays more than $1 for this record or the cd then they are getting ripped off. You always read that Glenn Danzig had Eerie Von go from drums in Rosemary's Babies to bass in Samhain "to utilize his imposing figure" etc etc. When you listen to this record its clearly cause Eerie sucked at drums and Steve Zing was the best drummer Glenn ever worked with. Eerie is a good bassist and great photographer tho. He also seems like he missed the GIANT ego sale Glenn,Jerry,Bobby,and Doyle went to :P