The Mohawks - The Champ 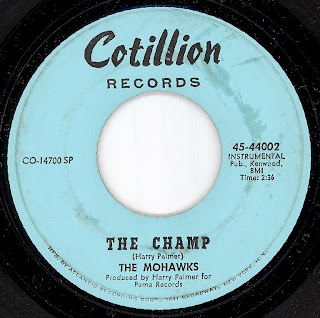 Oh man, this is a GOOD ONE! Funky ass organ mover from 1968 w/ The Champ, from the Mohawks!

The Mohawks were a band formed from session musicians and fronted by the undisputed king of Library music composers, Alan Hawkshaw. The Mohawks were never actually a 'touring' band, but rather the clever idea of some guy at KPM music in the 60's who decided to release a bunch of incredibly groovy and funky library music tracks and package it under the name "The Mohawks".

The Champ is also a widely known song for having been sampled in so many other songs, notably because the actual word they're shouting in the songs opening and chorus is actually Tramp, which may or may not have anything to do with it's popularity amongst hiphop artists. One could also argue the point that the beat is so genuinely great, making it an obvious candidate for popularity.

The Mohawks - The Champ
Posted by Devil Dick at 7:34 AM

Way to go DD...One of my all time favorites!!

Great, great tune DD - my kids love it, as they picked up on it from a Tony Hawks PS2 game - yeah, it's on the soundtrack

I'd never heard this before but it totally blew my socks off....I went lookin' for more Alan Hawkshaw & found plennnnty more out there, all of it pretty killer & tapping that same vein...thanks for turnin' me on!