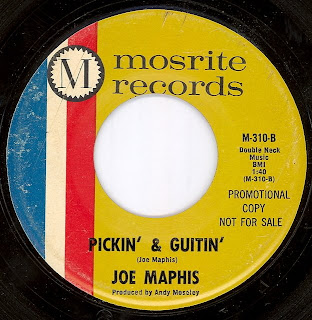 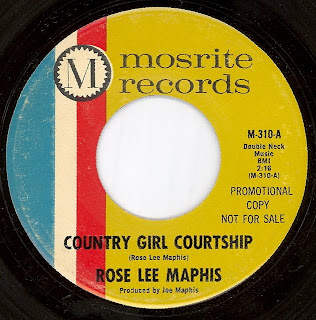 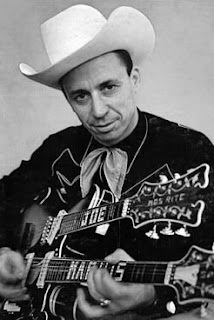 A good long while ago i got a request for this 45 after i played it on my goofy little radio show, well i finally got around to pulling it out and scanning the labels and downloading the songs and its been so long i doubt Nate Gibson
who requested it is even still reading this shit blog but anyway don't ever say i don't at least try and cater to those who drop by as i do appreciate the business!

So what we have here is a serious guitar picking instrumental by Joe Maphis and i mean serious pickin'! The other side is sung by his wifey poo about how she longed for the guitar pickin' Joe.

One of the flashiest country guitarists of the 1950s and 1960s, Joe Maphis was known as The King of the Strings. He was able to play many stringed instruments with great facility. However, he specialized in dazzling guitar virtuosity. Working out of Bakersfield, California, he rose to prominence with his own hits such as "Dim Lights, Thick Smoke (and Loud, Loud Music)" as well as playing with acts like Johnny Burnette, Doyle Holly, The Collins Kids, Wanda Jackson, Rose Maddox and Ricky Nelson. His playing was an influence on such greats as Merle Travis, Jimmy Bryant and Chet Atkins. He was known for his use of a double-neck Mosrite guitar, specially built for him by Semie Moseley, which was a boon to Moseley's fledgling career as a guitar builder. He was a regular guest on the Jimmy Dean television show in the 1960s.

I never knew Mosrite had a record label, that's awesome.

Love the blog, keep up the good work!

What is this? Joe Maphis week?
http://geminispacecraft.blogspot.com/

thanks, that was swell.

Mosrite had a few releases on 45, maybe an lp as well. My favorite is a great 45 by Tommy Duncan, one of his last great releases. Always turns up autographed.

I just picked up a Joe Maphis gospel lp that's quite good, so keep your eyes open.

Also, Nate Gibson, who's mentioned above, is running a Starday blawg. Peep it here... http://nathandgibson.blogspot.com/

can't believe it took me so long to find this post!! much appreciated. viva la mosrite! viva la starday! i hope to post more one day, and to check posts more often, but grad school has got me pretty much buried as of late... still, didn't want to let this go unthanked!