The Pentagons - Down At The Beach 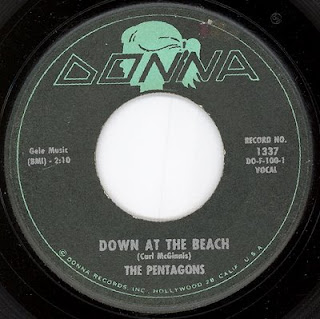 Here is one I've been threatening to post for real long time but for some reason I'm just getting around to it now. Maybe its the fact that the weather here was been pretty chilly lately but i hope summer is right around the corner, i'm ready for some warm weather and summer nights.
Anyway, I'm just started to feel 1/2 normal after my surgery and I am going to send this out to the lady friend as i know she is chomping at the bit the get her tattooed ass down to the Jersey shore. Seaside or Point, it's up to you...
usually i don't agree with records on the beach, sand and all, but the lady seems to dig it, and seeing as i dig her i guess that's its a-ok in my book!

The Pentagons are remembered for two 1961 hits, "To Be Loved (Forever)" -- which peaked at number 48 nationally -- and "I Wonder." The original lineup featured Joe Jones, Carl McGinnis, Bill James, Otis Munson, and brothers Kenneth Goodloe (lead) and Ted Goodloe and formed in 1958 in San Bernardino, CA, northeast of Los Angeles. Sometime during this early period, Munson left and James was later replaced by Odie Jones, Joe's brother, making for two sets of brothers in the Pentagons' lineup. A trip to Los Angeles that same year attracted the attention of George Motola's Fleet International, a label Motola owned with Lee Silver. The group recorded their first single, "You'll Be Coming Home Soon," which Motola released under the name the Shields. They were forced to change their name to the Pentagons after discovering a local act from Los Angeles had a hit that year under the same name ("You Cheated"). The group's next single would be the 45 that most doo wop fans and collectors remember them fondly for, the graceful and understated ballad "To Be Loved (Forever)," written by Ken Goodloe. The single was a regional hit in late 1960 and was immediately picked up for national distribution and reissue on Donna Records, a division of Bob Keene's Del-Fi Records. It later broke wide open after it was played on Dick Clark's TV show and in February of 1961, it peaked nationally at number 48 pop. After this initial glimmer of success, Lester Sill joined Silver and Motola as the Pentagons' managers. The group's next single was another Motola production, "I Like the Way You Look at Me," which was once again licensed to Donna Records. Though not a major hit, it still carried over that string-laden sound the Pentagons were becoming known for. The B-side, "Down at the Beach," written by Joe and Odie Jones, was a minor hit as well (although this happened two years after it was recorded). Beginning with the very distinctive "Billboard March" -- a calliope-like flourish heard at the start of a circus and also used in James Darren's number two 1961 hit "Goodbye Cruel World" -- the lyrics of "Down at the Beach" really captured the whole sunny SoCal surf and sand scene -- "you look good in your short shorts...I really go for your ta-yan." After this release, the Pentagons signed to Jamie Records, with whom Sill had connections, causing Keene to lose interest in promoting the Donna-released second single. Their final hit was the Jamie-released "I Wonder (If Your Love Will Ever Belong to Me)" which peaked at number 84 pop in October of 1961, but with no additional hits forthcoming, the group disbanded and faded into obscurity. Lester Sill, incidentally, also produced Duane Eddy's early recordings for Jamie. He passed away on October 31, 1994, in Los Angeles.
— Bryan Thomas , All Music Guide

The Pentagons - Down At The Beach
Posted by Devil Dick at 7:33 AM

2 New Bikinis on there way, beach umbrella is in the back of the car and Im ready to prop up your recovering ass on the beach next weekend. Thanks for loving the beach cause the kids & I do

Hey douchebag! You don't answer your phone no more???

Glad you are feeling better, even if only by 1/2.

I am loving that record label, btw ...

What is that cord plugged into??

Since we're from the same area I'm sure you'll understand why I refer to Wildwood as Kensington By The Sea.