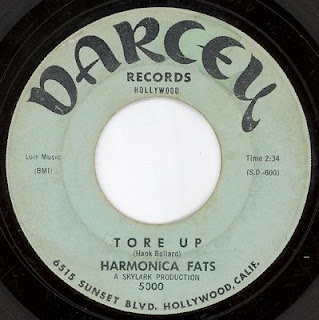 OK some mid week blues here that i am sending out to the fine folks at Its Great Shakes as this 45 showed up on one of their many record digging posts and i made a comment that i had this in the can and ready to go over here @ the devil's music and since i am trying to get caught up with things as far as getting some request and other things tied up it seemed like a perfect time to get this bad little boy posted!

Anywho, nothing long winded, just dig the tune, great gruff voice and a nice walking bass groove, sweet horns and then that harmonica = sweet! dig that 2:09 mark as well!
Just the thing to get you over the hump!

Harmonica Fats was actually Harvey Blackston, a former Louisianan who learned the blues growing up on his grandfather's farm; his longtime partner, Bernie Pearl, a native Angeleno, learned the blues from the musicians who frequented the fabled Ash Grove (a folk and blues club run by Pearl's brother Ed), including Lightnin' Hopkins and Mance Lipscomb.

In the early '50s, Fats took up harmonica as self-prescribed therapy while recuperating from an auto accident. Once confident, he formed a band, playing clubs around Los Angeles, and was known then as "Heavy Juice." Just as carefully, he perfected his songwriting, scoring on the R&B charts in 1961 with the self-penned single "Tore Up." After changing his name to Harmonica Fats, this success led to work as a studio musician, playing dates with performers as diverse as Bill Cosby, Ringo Starr, and Lou Rawls. He even did a stint as a traveling solo musician, seeking gigs as he drove in a station wagon around the country.

Harmonica Fats - Tore Up
Posted by Devil Dick at 7:03 AM

Yeah, this is a great one, both sides. A pretty easy one to snag too.

Tore Up is not a self penned Harmonica Fats tune but a cover of a tune the Midnighters originally did
in 1955 on Federal, Sleepy LaBeef also cut a good version in '59. Hank Ballard wrote it.
The original can be heard (and downloaded) here:

thanks hound, i lofted that info from the web so thanks for the clarification.

Make sure you follow Todd's advice and play the other side of this record. It's great, too.

Oh, and thanks for the very kind nod to "It's Great Shakes."

gr8 number, I had this years on a UK Stateside demo, although it's a really clean copy it plays crackly as hell & it really don't detract at all.
lifted a good Clarence Henry version from one of you blogsters recently that's well worth tracking down.
Matt, Worksop, UK

Fats performed in my yard in 1973
in South Bay LA. For free!
We fed him well with my Mom's Cajun cooking. He sure could play that Harp!

Wow excellent review of Harmonica. I always love the song by Harmonica. Recently I have collected my Suzuki Harmonica at PIJ. Its lovely. http://bit.ly/suzuki-harmonica