Gene And Wendell - The Roach 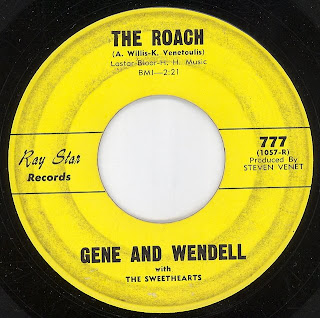 God Damn I'm bored!
I've had about enough of this sitting around waiting to mend bull shit. I've had enough day time TV and even the 45's are started to annoy me. I need some fresh air and action. Man, if i ever fall victim to house arrest or become crippled please just fucking kill me... anyway my being bored is your gain as i guess i'll keep the 45's coming. at least it gives me something to do around the house since i can't really do much else. Who knew stomach operations were so damn painful and recover time so LOOOOOOOOOONG....

So what you get today is a 45 that has been on continuous play 'round these parts. A cool soul like R & B dance number from Gene and Wendell from 1961. Eugene "Gene" Washington and Wendell Jones, were a duo from Los Angeles who recorded for an obscure label named, Ray Star.

Probably the most exotic and most quintessential of the R&B dances
was The Roach, popular in late 1961 and early 1962. The Roach is
generally a line dance with a somewhat fast tempo, with steps similar to
the Watusi. Its most characteristic step was a squishing motion made
with one's foot on a non-existent cockroach to the song's sharply sung
refrain, "kill that roach." This cut also appeared in the Waters film Hairspray in 1988.

Gene And Wendell - The Roach
Posted by Devil Dick at 7:18 AM

I love this song! Thank you! Feel better

Love this Song hope amazon gets it on the music