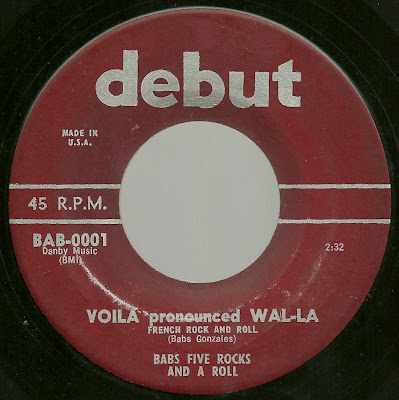 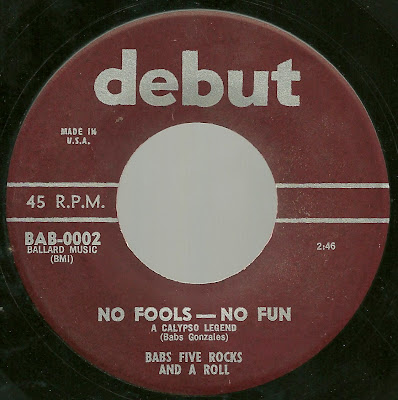 Strange one today... French rock and roll back with some Calypso by Babs Gonzales. Some more New Jersey greatness...

Babs Gonzales (October 27, 1919 – January 23, 1980), born Lee Brown, was an American jazz vocalist of the bebop era most notable for penning the song "Oop-Pop-A-Da", which was originally recorded and performed by his own band (Three Bips and a Bop) and was later made famous by Dizzy Gillespie . Babs was also once the chauffeur for Errol Flynn. In 1967, Babs published an autobiography entitled: "I Paid My Dues: Good Times... No Bread - A Story of Jazz" (Lancer Books).
Gonzales was born in Newark, NJ. He was known to be an exponent of vocalese, an example of this would be his version of the Charlie Parker bop standard "Ornithology". From 1950 to 1953, Gonzales was road manager and vocalist for the James Moody band and later gigged and recorded with musicians such as Jimmy Smith, Bennie Green, Lenny Hambro and Johnny Griffin. Sonny Rollins also made his recording debut with Gonzales. He was also a Beat poet.

Babs Gonzales - Babs Five Rocks And A Roll - No Fools No Fun - A Calypso Legend
Posted by Devil Dick at 12:46 AM

So WEIRD! As I stumbled onto this link, I realized that "Ooh Papa Dah" by Dizzy was playing on my PC (listening to sky.fm's "bebop" channel!).. And I wasn't even looking for Dizzy or Babs- I was following a series of Sonny Rollins links! Funny how that sort of thing happens once in a while!