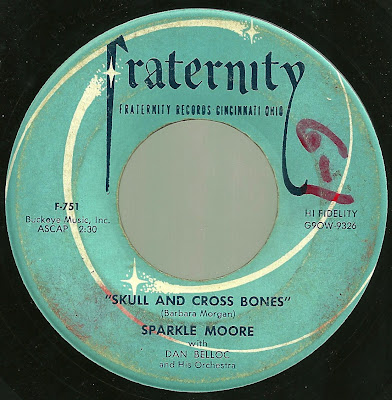 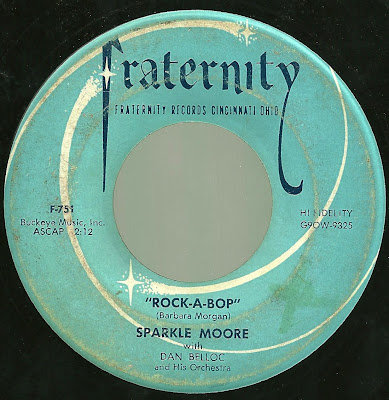 You Should Be Labeled With A Skull And Cross Bones!

Your A Jinx To My Soul!

Sparkle Moore (born Barbara Morgan in 1939 in Omaha, Nebraska) is a rockabilly singer, who recorded only a few songs during her career, but was highly influential as a pioneer of female rockabilly. Her name was earned because of her similarity to Sparkle, a supporting character in the Dick Tracy comic strip. Sparkle dressed in men's clothing, often including leather, and sported an Elvis-influenced pompadour.
In 1956, she toured with Gene Vincent and was scheduled to perform on the Grand Ol' Opry, which was subsequently cancelled due to illness. In 1957, Sparkle retired from music after becoming pregnant to concentrate on raising a family.

This one has been on my hit list for a many a long year. Just unearthed for a scant 1 dollar. Its a well played little record but it still gots it!!!

Yes, yes, yes. I got these two from a compilation someone posted. I love both songs. Sparkle Moore would be immortal just for that picture. The music secures her place among the Gods.

this is so fucking great!

Are you sure that's a pompadour? Looks like a mullet to me! Good stuff, Dick!