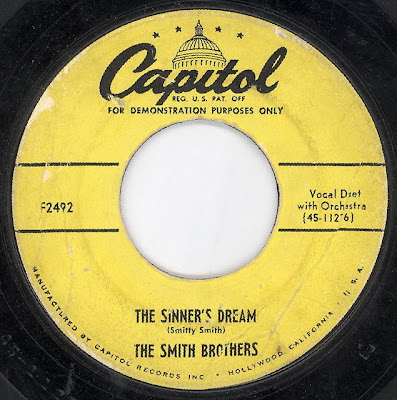 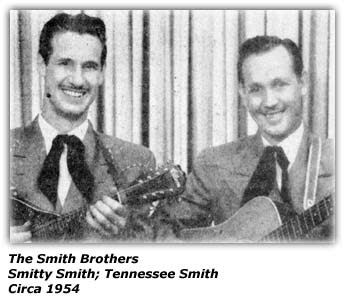 To Prove that anything and everything goes here at the devil's music and after a few great funky soul cuts from The Triumphs & Alvin Cash, and then some blistering heavy psych, we now switch it up even further with some fine hillbilly country gospel music with The Smith Brothers from 1953.

The Smith Brothers, Smitty and Tennessee, were born in a small town called Oneida, Tennessee into a musical family. The boys learned to sing the gospel and folk tunes that were familiar to the local folks back then. The Smith Brothers were a gospel duet team. They did numerous personal appearances in the Southern region of the United States as well as recording for Capitol records.

They were at first with the group called the Sunshine Boys.

The Smith Brothers found themselves in Hollywood for a time. During their four years, mostly with the Columbia studio, they appeared in 17 films. They were said to especially be proud of their work with Charles Starrett in the "Durango Kid" series.

But television was coming onto the scene and the brothers wanted to see what it would offer them. They heard that WSB-TV was to become Atlanta and the south's first television station. In fact, it went on the air in September 1948. The Smith Brothers made a favorable impression with the station manager and program director and became the first musical act and thus, the first "live" television show in Atlanta.

Soon, Atlanta had a new station - WAGA-TV. Smitty and Tennessee put their heads together again and thought they could have a bigger and better show. Evidently they couldn't convince the folks at WSB-TV, so they switched to WAGA-TV. They went on the air with folks such as Boots Woodall, Paul Rice and announcer Jon Farmer, doing a 75-minute daily show called "TV Ranch". The show gained immediate popularity with the fans and in 1952, the folks who read Atlanta's "TV Digest" voted "TV Ranch" their favorite local music show.

Around this time, they recorded four sides for an independent record label. The records sold well and word got back to Ken Nelson of Capitol Records who convinced them to sign a recording contract with Capitol.

Their popularity continued to gain momentum in Atlanta. WAGA-TV gave them another daily show at 5:45pm which they did alone, singing their familiar duets and gospel melodies.

A 1954 article notes that the brothers were well qualified and talented enough to play Western swing and popular music, but their real interest was in the Gospel songs.
http://www.hillbilly-music.com

The Smith Brothers - Sinner's Dream
Posted by Devil Dick at 12:17 AM

The Smith Brothers are great.
Now I will half to go threw my records and try to find the sunshine boys, I think I have
then on some anthology records.
Cool stuff thanks
Floyd A