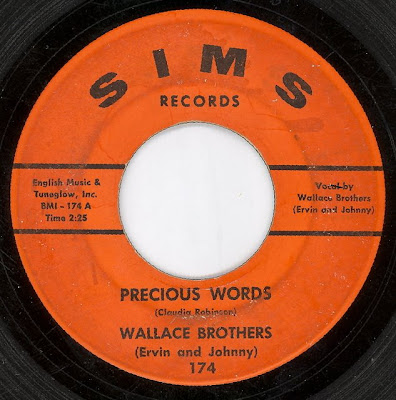 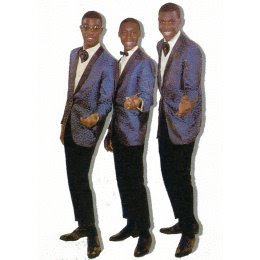 Some mid week 60's soul and another one of the faves here @ the devil's music:

I usually dig my soul on the heavy & funky side of things but when i dug this little gem up a few years back i really fell in love with it. The raw emotion and feeling in this cut really hit me hard. From 1964 here are the Wallace Brothers with Precious Words.

The Wallace Brothers, who were actually cousins Ervin Wallace and Johnny Simon, started in the music business as young teenagers and were among the first black artists to record at Fame Studios. Their early recordings were raw, unpolished soul and although the production values weren't necessarily the highest, their uninhibited vocals were highlighted by that very lack of sophistication. The emotion and intensity in the tracks come through as strongly now as they did some 30 years ago when they were cut. Their later Jewel 45s were more sophisticated – classic period Muscle Shoals music – but still had that same vocal intensity.

The guys came from Atlanta, attending the Archer High School there, and if you can believe the info on the back of their only US album, by the ages of 14 and 16 respectively they were apparently on the road with their own 6-piece band, not only sharing the vocals but with Simon playing sax and Wallace trying his hand at guitar. But much of this may be marketing tosh as these "facts" are accompanied on the sleeve of a picture of 3 smiling young teenagers in tuxedos and four similar gents on the back!

Their first disc was cut locally in Atlanta for the tiny Royal concern and, as its name “Faith” implied, heavily sanctified soul. A funeral slow number featuring an organ and a meandering sax, its the young harmony vocals that grab the attention, as the uninhibited gospel phrasing very much set the tone for their subsequent recordings. It obviously caught the ear of Russell Sims in Nashville as he picked it up as part of his increasing interest in R & B. Their next 45, “Precious Words” was, if anything, even more church based than their debut, and may well have come from the same initial Atlanta session. This had good chart success and was built on by “Lover's prayer” which became their biggest 45.
http://sirshambling.com/artists/W/wallace_brothers.htm

Wallace Brothers - Precious Words
Posted by Devil Dick at 6:05 AM

two Great Ones Back to Back

Great stuff, kind of reminds me of the Sweet Inspirations.

Darn . . . I can only hope that some time you'll be inspired to re-upload this one.