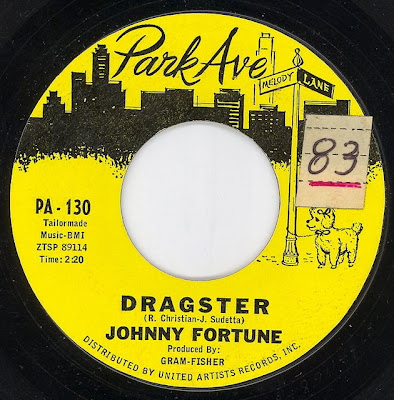 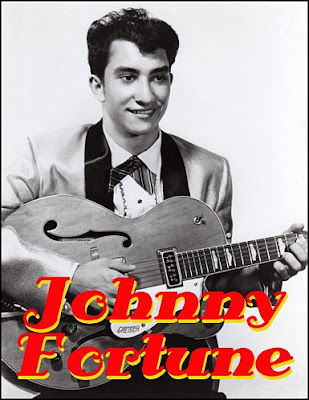 There is nothing like hot rod music. Any tune that has wheels screeching, gears shifting and engines revving has a certain place in the devil's heart and this one is no exception. This thing really cooks with some sweat rocking guitar, pumping bass and a driving beat that never quits and car sounds mixed in throughout the whole song make this a grade a checkered flag winner!

Johnny was born March 18, 1943 in Warren, Ohio. At age 12 he picked up his first guitar. At age 16 recorded recorded"Soul Surfer." It quickly became a #1 hit. He wrote it in the back seat of the car on the way to the studio.
Johny played guitar on Sam Cooke's "Chain Gang" and Barbara George's "I Know." He was offered a chance to tour England with Johnny Burnette. He had to decline because he was under age.
Johnny went on to play with such notables as: Terry Stafford, Glen Campbell, Barbara Stanton, Al "The Snake" Wilson, Jerry Hopkins, Harry Belefonte, Eddie Downs, Fabian, Ricky Nelson, Jerry Reed, Willie Nelson, Barbara Mandrell and The Drifters.
He also performed with The Rondell, The Cornells, Dick & Dee Dee, The Standells, Brian Highland, The Crystals, Freddie Wheeler & The Petersons, The Tornadoes, The Three Beats and The Blenders. Televison appearances included: "Solid Gold." "The Lloyd Thaxton Show" and "The Dinah Shore Show."
When Johnny was playing with a well known artist or unknown, he always played to enhance his musicians' performance. No venue was too big or too small. Johnny gave it his all.

Johnny Fortune - Dragster
Posted by Devil Dick at 12:08 AM

Clifton White was Sam's regular guitarist during the "Chain Gang" period (recorded in early 1960, released that July). Do you know when Johnny Fortune claimed to play guitar on "Chain Gang?" As a studio musician? I guess my question is "where did that factoid come from?"

That was a good one. I love the sound of the engine. Some songs are just so much more memorable with the added sound effects. My favorite is the one at the end of the Dickies' "Manny, Moe, and Jack".

sam's neph, i pulled that off a Johnny Fortune web site. Looked like it may have been family run or maybe just a fan.

Good one! I love that label art, too. Floyd: the one at the end of "Manny Moe and Jack" sounds identical to the crash in "Leader of the Pack"!

Thanks for the clarification on the "Chain Gang" recording session, DD.

His playing is great! I can hear how he would have played for and with all the talent listed. You topped yourself again Ol' Devil Dick... I'm really glad I found this site. Far as the Sam Cooke session(s), only Hugo & Luigi know for sure.
MikelJ

hey folks, i REALLY appreciate the comments. I try and give a little background on all the 45's i post but almost everything i post is culled from the web so accuracy is limited at best i would imagine.

I've always been a record collector but the great thing about doing this little bloggy here is the fact that it actually forces me to find stuff out about these cool records that i have. Most times it makes the music even that much more enjoyable, at least for me, to find out some nuggets of info on each. I don't claim to bat 1.000 here but i try my best to find accurate info, so, if i slip, just pick me up! and thanks!
dd

Johnny's bio and Johnny himself claimed that Johnny recorded with Sam Cooke "Chain Gang" and Barbara George "I know"... It does not say he played on those recordings. The song names serve to identify the artist. How do I know? Johnny was lead guitarist in my band for 4 years, 1990-1994.
Ed Greenwald