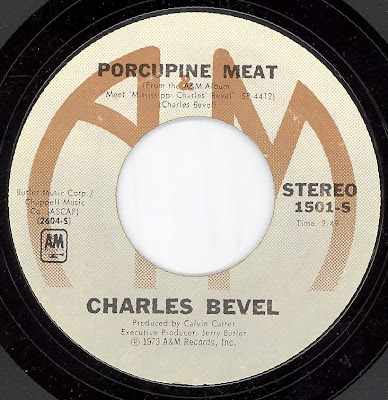 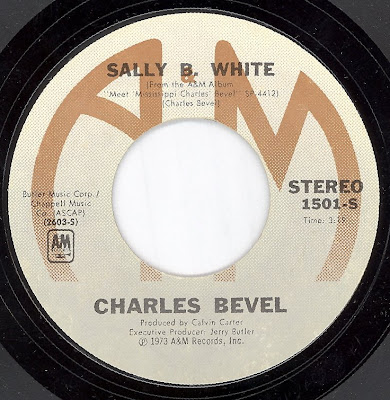 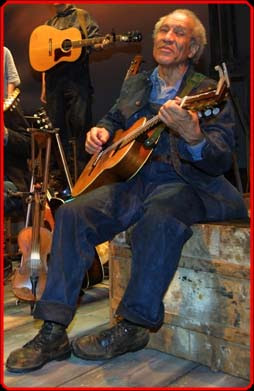 Porcupine meat, too fat to eat, to lean to throw away…

Man what a cool 45 from a guy I knew nothing about until fairly recent when I found this 45 in a pile of rotten old vinyl.

Mississippi Charles Bevel, multi-media artist and lecturer began his professional career in 1973. From 1973 through 1983 he performed intermittently as a musician, including a self terminated one year stint as a recording artist on the A&M record label. During that ten year period the most meaningful of those years of Mississippi were spent performing as a duo with another songwriter/performer, Chic Streetman. They also worked as an opening act for such artists as Taj Majal, Richie Havens, Hoyt Axton; Sonny Terry and Brownie Mcghee, Doc Watson, B.B. King, Third World, Albert King, Gil Scott Heron, etc.

Not sure why he terminated his contract with A&M bit it’s a bit of a shame because these 2 tunes are pretty damn cool and I had no idea who he was until I stumbled upon this 45 a while ago. Maybe if he stuck around more folks would know who he was. Or maybe they do? Now I have to find his full length album and see if the rest is as cool as this 45…

I was born the fourteenth of seventeen children, to cotton-plantation parents in the Delta of Mississippi.

For a time covering some thirty years after my birth, in periods of one month to less than two years, I had spent time in Mississippi counties like Sunflower, Leflore, Tunica and Choctaw; on cotton plantations like Joe Perry's and Joseph Pugh's; in small towns like Wier, Itta Bena, Swifttown and Greenwood. Then it was out of Mississippi and on to big cities like Memphis, St. Louis and Cleveland. And then, on to military bases in Illinois, Oklahoma, Tennessee, Hawaii, Japan, Kwajuluen Island, Midway, Alaska and California.

During those many years there was no one, other than myself, who could have borne witness to the artists gestating inside of me; artists barely kept alive, but who could sing, write, act, and create visual art. At thirty-one the musician was born; at forty, the writer; at forty-eight, twins, the actor and the visual artist. Giving birth to those mysterious personalities, my bumbling attempts at nursing those babies, was not only an unnerving disruption to my own life, but extremely confusing and disturbing to family and friends as well.

At sixty, there is some disquiet in my life, but hardly about death. Life has showered me with too much sweetness to leave me fretting over when death will appear to gather my bones. Any uneasiness is about the illusion of time; not enough time left to divulge my revelations; my mysteries. Not those places mentioned above or the people met along the way--the world is well acquainted with those places and faces. Sure, I've been to forty seven states and ten foreign countries. But do you really want to read another personal travelogue? How about some real biography; the feelings, the thoughts, the uncommon visions and singular experiences that we all have had but which few of us can find the courage to share. There is the powerful hope that someday through my "other children"-- those half nourished artists that I have given birth to--you will get to taste, see, hear, touch, smell, and even balance against your own, my mysteries--the real biography of Mississippi Charles Bevel.

An alone life, yes. But hardly a lonely one!

Thanks for the Bio! Bought this record at my local used record emporium years ago and never knew anything about it until today! Porcupine meat to tough to eat to sweet to throw away!

I had the misfortune to see an Anthony Bourdain where he was inadvertently served porcupine meat in Vietnam. They called it "squeasal."

Thank you for your great work!

Discover the latest posts from your favorite music blogs at one place!!

watched an episode of Soul Train tonight where they played Sally B. White and was searching high and low for a download afterwards. thanks for this! happy holidays!

glad i could help softspoken and thanks for the link back!