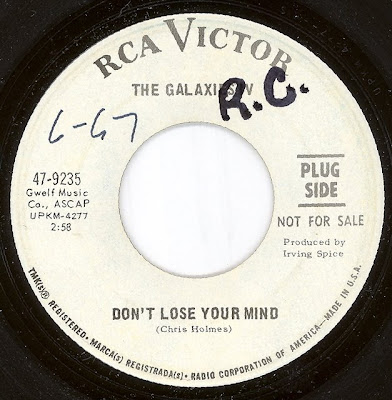 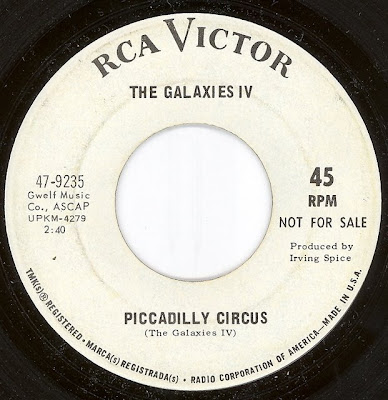 Something to rev up your Saturday, by way of Trenton New Jersey! Some really cool psychedelic garage music by The Galaxies IV!

The Galaxies IV formed at Catholic school in Trenton in 1964. Members were T.J. Tindall on guitar, Chris Holmes on guitar and vocals, Charles Brodowicz keyboards, Len Demski bass, and Alan Fowler on drums. T.J. Tindall left the band early on when his family moved to Pennington; he eventually joined the Edison Electric Band.

The first Galaxies IV 45 was Let Me Hear You Say Yeah/ Till Then You'll Cry recorded at Regent Sound studios in New York City and released on the Veep label.

This was followed with two 45s on the Mohawk label, first Don't Let Love Look Back, and then Piccadilly Circus / I'm Goin' For Myself.

Piccadilly Circus was picked up by RCA for national release with the Chris Holmes' wild original Don't Lose Your Mind on the flip.

Winning a huge battle of the bands at Lambertville Music Circus judged by Phil Spector and Cousin Brucie Morrow led to features in the NY Times and Reader's Digest.

Adding a lead vocalist, Steve Shier they changed their name to Galaxie V and then Alexander Rabbit, releasing an lp on Mercury. Afterwards, Chris Holmes took the stage name Duke Williams and led his own band throughout the '70s.
Info courtesy of garagehangover.com

Remember finding this in a San Angelo thrift a couple of years ago AFTER some Dallas diggers had already hit it and picked up some great garage 45s.

I'm trying to make a collection of old stuff with spacey sounds, if you recommend any more drop me a line!
Rich
aftersabbath@live.co.uk

You were in Solace right? Really dug you guys!

yeah rich tommy from solace here! cheers & thanks glad u like dthe tune and the band! have you heard this????

Sorry for the late reply man, yeah I have heard that one, it's the best JD song there was I think!