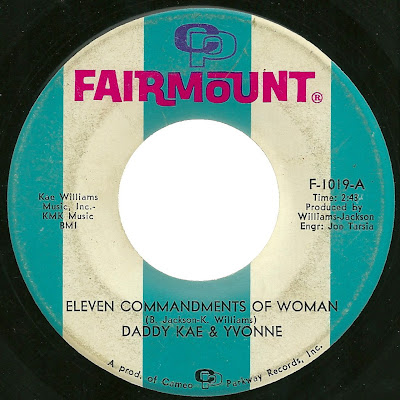 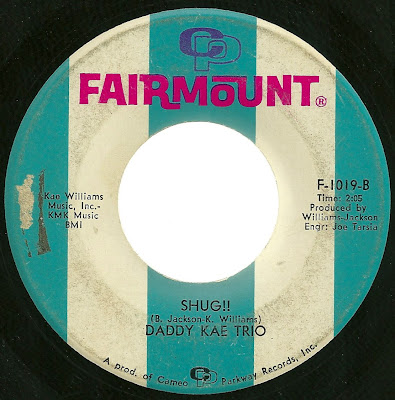 Here is one from Monday's scores. This in all appearances would be the response song to Prince Buster's "Ten Commandments". It would make sense this record was unearthed in Philly proper... Read on.


"Get out of that bed and make that bread"

...
In March of 1941, a half year prior to the attack on Pearl Harbor in Hawaii, Kae entered the U.S. Army.In April of 1942, he received an honorary discharge while stationed at nearby Indiantown Gap, Pennsylvania.While in the service he was a member of the first all African-American field artillery battalion.

Then Williams got a job as a Youth Corp Coordinator.It was a city gig funded by a federal grant.His office was located in the famed Philadelphia Navy Yard.There, he instructed high school dropouts in good work habits, including attendance, punctuality, personal appearance and the value of dependability.He also was charged with the responsibility of applying a thorough working knowledge of policy rules, regulations and instructions pertaining to a broad range of personnel matters, including the counseling of employees and efforts to seek corrective actions or remedies to their problems.

Known as one of the earliest local disc jockeys of the blues, he broke into radio in 1943.Two years later, he went to WHAT Radio.At the same time, he also wrote for the Philadelphia Tribune (1945 to 1948) as Theatrical and Night Club critic.
...
In 1968, Williams became "Coordinator" of the station.By Spring of 1970, Kae Williams was no longer with the station.
...
In early 1954, an R&B group with gospel roots called "The Dreamers" met Kae at the studios of WHAT Radio.Dolly and Billy Banks, owners of the station, allowed Kae to invite area teenagers into a studio next to him.
...
There, the teens could dance to the music Williams was playing. Once in a while, Kae would wander next door and talk with the kids.It was one of these times he met a quintet.They were the Dreamers.Kae auditioned them and liked what he heard.

A couple months later, Kae took them to Reco Art Studios and recorded two sides.
...
The group and Kae started playing with names when someone said that Arthur had two middle names, Lee & Andrew.
...
Williams took the sides to Eddie and Bobby Heller who owned a nightclub in North Philly.
...
Kae worked out a deal and the Hearts released three releases on Rainbow, but without a lot of success.Williams decided to break the affiliation with Heller and for awhile, The Hearts only performed in area clubs, but they got a lot of exposure.
...
In 1957, Kae Williams (then at WDAS Radio) signed the group to his own small label, Junior Records.
...
Kae had them record two sides.
...
Kae also was responsible for another Philadelphia based group, The Sensations featuring Yvonne Baker, whose song "Let Me In," reached the second spot on the R & B charts in 1962.
...
Other Philadelphia artists whose success was related to Kae Williams are Solomon Burke, Moses Davis, Screamin' Jay Hawkins, Don Gardner and Doc Bagby.
...
While Kae Williams had a hand in early R&B and Doo-Wop, his main love was "The Blues."In fact, most of his radio broadcasts featured little else.
...
"If there is a musical genre that Philadelphia has, which Kae was solely responsible for promoting, it is the Blues.In fact he was dubbed "Daddy of the Blues."When blues was kind of a stepchild on the music scene in Philly back in the late 50's, Kae specialized in playing nothing but the blues.
...
Kae whose good natured, gruff voice admonished, "Get out of that bed and get that bread."

Kae was known for his charitable contributions and personal appearances for worthy causes.He was a member of the Board of Directors of The National Association of Television and Radio Announcers and President (and later Chairman) of the Strawberry Mansion Civic Association.He was on the board at the Columbia Avenue branch of the YMCA.At the University of Pennsylvania, he served of the board at the Wharton School of Business.He was also on the board of the Tioga - Quaker City Golf Club and was on the Strawberry Mansion Junior High Advisory Board.

He was also chairman and president of the local federally funded "Model Cities" program.About this, Williams said, "As chairman of Model Cities Area No. 9, it was my duty to coordinate all the efforts of civic and community groups in my area totaling approximately 60,000 residents, meeting with redevelopment authorities to determine dislocation and relocation of residents, service buildings, needs in the community, fighting crime in neighborhoods, (and) assisting the aged and youth in establishing programs beneficial to the area residents."

In 1957, Kae received an award from BMI.It was for the record, "Get a Job" for selling one million copies.In 1964, Kae had a local television show which lasted for one year.In 1978, he received the Mary Dee Award for outstanding community service.It was the first time the honor was ever presented.In 1989, Kae, Jr. accepted on behalf of his dad, the Lifetime Achievement Award from the Philadelphia Music Foundation.

During his life, Williams loved dance. He had won several awards for tap and ballroom dancing.He appeared with Count Basie, Lionel Hampton and Erskine Hawkins.Williams mentioned one time, "I studied music and dramatics at Al Berkman's School of Dramatic Arts, Philadelphia.I have also produced weekly variety shows at the Liberty and Uptown Theaters in North Philadelphia."

If there is a pioneer of the Blues as far as radio is concerned, it is Philadelphia's own , Daddy Kae (Loudmouth) Williams."He passed away on December 23, 1987.

In the mid-1950's, Kae reached what would be eventually the high point of his career.

He, and the group he was now managing, the Silhouettes, had a huge pop hit with 'Get a Job.'

The track sold several million copies in this country and abroad and topped the pop charts.

He, also, managing a group called the Sensations, which sold close to a million with the pop tune 'Let Me In.'

These records made everybody money but him and he felt a little bitter that he never got his due moneywise or publicity wise because Kae didn't own the publishing copyright.

At the time this type of thing happened to a lot of the black artists, promoters and producers in those early, pre-civil rights days of rock.

Kae Williams also inspired a lot of youngsters, black and white, to go into radio and music.

He always had time to help the new kid on the block.
...
Williams enjoyed the time he spent with the Traffic Court, said the Rev. Darryl Williams, one of his sons, because 'It still kept him somewhat involved with people.He was a people person.'
...
During his lifetime, Kae Williams received many awards. Here is a run down:

BMD - Award (Broadcast Music Inc.) (1957)The B.M.D. Award was presented to Kae Williams by Dick Clark for the hit record ("Get A Job") exceeding the sales of one million copies.
...
In 1964 Kae Williams was sponsored by Network T.V. (W.P.E.N.) in Philadelphia. This show lasted for a one-year run.In later years this show was revamped and became the Ed Hurst show.

N.A.T.R.A. - (National Association of Television and Radio Announcers)Kae Williams was chairman of N.A.T.R.A. along with being a dedicated members.

Lifetime Acheivement AwardIn May of 1989 Kae Williams Jr. was presented producer of the year award and by surprise was given the Life Time Acheievment Award for his father Kae Williams Sr.

i played this at a pre-wedding party in June. it got alot of attention and alot of "amens"