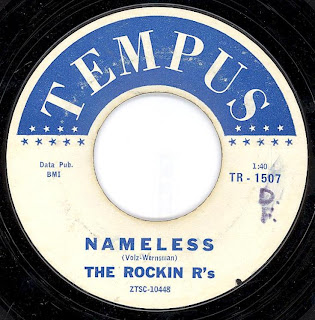 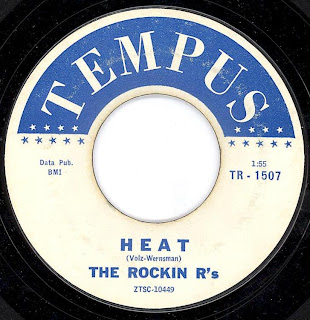 I already had their 1st 45 Crazy Baby/The Beat and just uncovered this white label promo of their 2nd 45. I i dig this one almost as much as the 1st one! 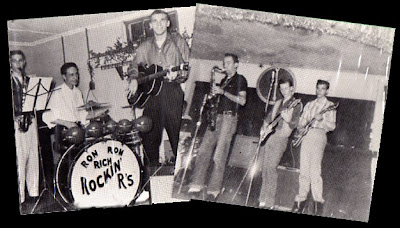 The following is taken from the Rockabilly hall Of Fame

Those two cats with the thousand dollar Jimmy Carter smiles strummin' their way to infamy on their platter's front cover are Ron Volz and Ron Wernsman, kingpins supreme of the legendary Rockin' R's rock 'n' roll group. Now it's important when sizin' up these hombres' whole wazoo to flip back over to the other side of this cardboard and dig their surroundings, 'cause it was in those environs - the Wernsman family basement way out in Peoria, Illinois suburb of Metamora - that the R's first lit their fuse in late 1957 with their special brand of subterranean swing.

"Mr. Wernsman was just the greatest guy," sez Volz. "Five nights a week he let every kid in town down to his basement for a party. Packed every night. We had a lotta tuff gangs in town and they'd come by, too. All Mr. Wernsman asked was that they check their weapons at the door - "GUNS AND KNIVES UNDER THE FLOWERPOTS, FELLAS!' There was virtually nobody playin' rock & roll in town, so Ron & I got things goin' with our guitars." With sprite fingered Volz pickin' leads over Wernsman's rhythm, they became the Rockin' R's when they grabbed Ted Minar offa Mr. W's basement couch to pound the skins. The trio blasted the hits of the day (leanin' heavy on Berry, Vincent, Little Richard & the Everlys) to the lucky legions in that finely wallpapered basement.

Outta these cellar bashes come the earliest recordings on their LP - a roarin' version (well, half a version) of "Whole Lotta Shakin'" taped at an R's party and a handfulla rehearsal swingers like the Sparkletones-styled shuffler "Gonna Snatch Me A Satellite" (actually a wise retitling of the Couplings' hokey pop toon "Young Doves Calling") and a boffo step onna gas kicker of "You Send Me."

But it was while the Rockin' R's were warmin' up with some non-vocal racket that Tempus hit paydirt. "The weird thing," sez Volz, "is we just started horsin' around while he was settin' up. He taped a little bit, called it 'The Beat' and it became the biggest hit we had!"

To whoop up the act a bit, the Rockin' R's took on a forth member, local sax boy Rick Bressick. Now Bressick was no threat to Lee Allen but he helped plant an important seed in the combo's collective noggin, namely that a sax would help 'em compete with a lotta the tuff fuller combos that were THE deal in '58. This short lived ineup made several appearances on the Paul Beard Show, a local TV variety program hosted by car dealer Beard, whose hackneyed approach to rock & roll makes Steve Allen seem like the Mad Daddy. In addition to their own TV spots, some of which are paraded on the platter, the band reluctantly backed a horrid hometown chickadee Judy Noll, the Linda McCartney of Peoria.

Meanwhile, back in the charts, "The Beat" spread like crazy locally, goin' on to top many midwest hit parades and ultimately made a national holler with strong placing in both Billboard & Cashbox, earnin' the boys the surefire girl-getter, namely a spot on American Bandstand. Six months after "The Beat" charted, the Rockin' R's pumped out "Heat"/"Nameless", another strong two-sider for Tempus, sportin' a marked upswing in the sound thanks in no small part to Bressick's replacement on sax, Art Bill. The R's literally yanked Bill right offa the stage of a strip joint called the Clover Club and this, the group's most durable lineup, toured purdy much non-stop, landin' dream gigs with their idols Jerry Lee Lewis and Gene Vincent amongst others. Sez Volz, "After the first record hit, everything started happening real fast. We were so young and willin' to do anything on stage - climb on equipment, climb on each other, hang from the celling, anything! Our whole outlook got outta hand but man, we loved it!"

Instead of lettin' the guys follow the cool path they were rockin' out, Tempus tried to market Volz as a teen idol. After a couple poppy sides it was agreed this brainstorm wasn't doin' anyone a whole lotta good and the Rockin' R's duly bounced back with the scorchin' "Mustang," jumblin' the looseness of "The Beat" with the ballsy drive of "Nameless." It was a fantastic disc but Tempus steadily became untracked with a string of non-R's money dran flops and the label went kaput. It seemed the guys wre starin' some long green inna face by steppin' up to the big time Vee Jay label but the effortless cellar swing that was the Rockin' R's trademark suffered in the process, what with rigid studio confines, reshuffled personnel (Wernsman even conceded and switched to the taboo bass) and just plain weariness. The Rockin' R's ultimately crapped out in "62, plumb outta gas accordig to Volz.

That's purdy much the musical end in the proverbial nutshell, but there's a whole lot more to the Rockin' R's tale (like the time Wernsman put his ass thru a jukebox and they hada tape his bloody cheeks together to finish a show!) which Bob Paton & Steve Rager spilled out in fine detail in KICKS#6. So now after alla those moons their LP is the very first collection of toons by (as goofball MC Paul Beard intoned) "the rock & rollers from Metamora," a little ruff but plenty wingding worthy (guns & knives under the flowerpots, of course). So get with the Rockin' R's, muchachos, and go CRAZY BABY!!

These are great - thank you!

Thanks! Have had this 45 many years but don't have a way to digitize vinyl at home.

Tremendous! Thanks for posting.

P.S. I love the scratchiness. That's how real rock 'n' roll should sound.

Got the stock copy and a minty promo of this