Procession - One Day In Every Week 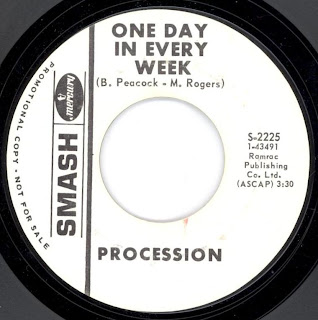 If you have to pick one day in every week it might as well be Friday...

I know nothing about this band, but i do know that this has a very David Bowie vibe, at least to my ears. And that is good enough for me.

Here is what i found out via the web:

Procession was a jazz-tinged rock band formed in Melbourne in October 1967. The group is most notable for including English guitarist Mick Rogers who later joined Manfred Mann’s Earth Band. Drummer Craig Collinge was a member of British proto-punk band Third World War.

Procession - One Day In Every Week
Posted by Devil Dick at 7:45 AM

Nice! Definitely Bowie-esque on the vox. Reminds me a bit of the Small Faces, too.

just found your terrific blog a few days ago. Unbelievable range of records!

"This is a private file.
Divshare staff disabled access to this file."

--message, does this mean the file isn't available? I was dyin' to hear "Voodoo Walk" by Sonny Richards on Chancellor.

Got it. Thanks much DD.
You da man!

This band has a fantastic LP, I think Self Titled on "Smash" released in the US. My fave track from that LP is called "Mind Magician". Pick it up if you see it!

i always rated this band very highly, and now i send you a link to their american album....

I am really enjoying your blog ...