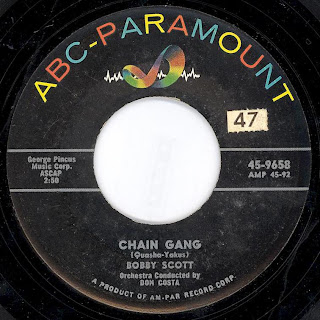 Scott was a pianist, vibraphonist, and singer, and could also play the accordion, cello, clarinet, and double bass. He studied under Edvard Moritz at the La Follette School of Music at the age of eight, and was working professionally at 11. In 1952 he began touring with Louis Prima, and also performed with Gene Krupa and Tony Scott in the 1950s. In 1956 he hit the U.S. Billboard Hot 100 with the song "Chain Gang", peaking at #13. (This is not the same song as Sam Cooke's "Chain Gang".) As a bandleader, he did sessions for Verve, ABC-Paramount, Bethlehem, and Musicmasters. As a songwriter, he won a Grammy award for Best Instrumental Composition for the song "A Taste of Honey". In addition to "A Taste of Honey", Scott also co-wrote the song "He Ain't Heavy, He's My Brother". In the 1960s he became a music teacher and studied again under Moritz, but occasionally recorded as well, including a Nat King Cole tribute album released in the 1980s. He also arranged for jazz and easy listening musicians such as Les and Larry Elgart.

Don't know what it is about this song but i realy dig it...


Bobby Scott - Chain Gang
Posted by Devil Dick at 7:33 AM

Cool song. Very haunting sound. Your blog has inspired me to start my own blog as well.

Its almost impossible to find solo music by Bobby Scott. His work as a producer, arranger and writer just makes you wish he did more as a solo artist.

I like the moaning and howling! Thank you for sharing!

I knew Bobby Scott. After he had hurt his hand (in a bar fight, apparently), he asked me to learn his "Five Pieces for Piano" that he'd recently composed with a view toward recording it. I learned it, but there never was a chance to get his input or to actually record it before he died. I had made a tape recording, which I still have, of a rough run-through; and I still have the music.