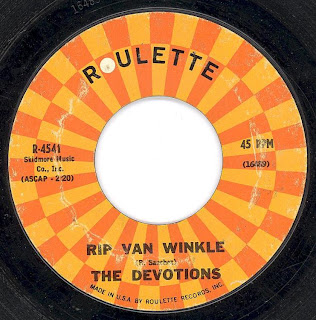 Formed in 1960 in Astoria, New York, USA, the Devotions were a doo-wop group best known for their 1964 novelty recording ‘Rip Van Winkle’. The group included Ray Sanchez, who sang bass-lead, Bob Weisbrod, Bob Hovorka and brothers Frank and Joe Pardo. With their manager, the group auditioned in 1960 for a small record label, Delta, whose owner, Bernie Zimming, was not impressed with their sound. The group wrote ‘Rip Van Winkle’ that day and Zimming liked it. However, it did not sell, but two years later, when the larger Roulette Records acquired Delta, it was released again. It still did not reach the charts, and the group disbanded. In 1964, however, Roulette included the song as part of a Golden Goodies album series and it attracted more attention. Roulette issued the single for a third time and this time it made the US Top 40. A new Devotions group was assembled including three original members, but when further singles flopped, they disbanded in 1965. 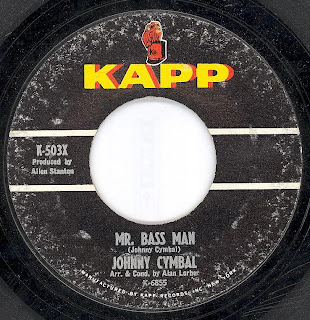 During a career that spanned four decades, from the time he was 15 until he died in 1993, Johnny Cymbal made a meaningful impact on popular music worldwide as a songwriter, singer, performer and record producer. During those years, in addition to his rock and roll anthem, "Mr. Bass Man", he was responsible for hit records including: "Teenage Heaven", "Cinnamon", "Mary In The Morning", "Rock Me Baby" and "I'm Drinking Canada Dry".

In 1963, with his smash hit "Mr. Bass Man" all over the top of the charts from the United States to Asia, Johnny Cymbal was recognized as a teen star. While continuing to record, he toured the U.S., Europe and Japan performing as both a solo headlining act and in rock and roll package shows. Later, as a songwriter and record producer, he found success in New York City, Los Angeles, and Nashville.


I'm sending these two out to my internet blog pal Jon over at Poetry Is For Assholes for trying to help me out w/ The Holy Modal Rounders.

It's a long story that started w/ Sheriff and the Ravels, went to the Holy Modal Rounders and ended here... (or did it?)

Just to repeat the story, I was a tiny fellow listening to WABC with my sister. On came Mr. Bass Man by Johnny Cymbal. I asked my sister if they played that kind of music all of the time on the radio. She told me yes, I could hear that sort of thing often if I just listened. I was hooked. It was my first rock and roll song. Really, I like novelty songs. Prior to Mr Bassman I was a huge fan of Sheb Wooley's "Flying Purple People Eater". I even had a "Flying Purple People Eater" halloween costume. I also loved "Who Wears Short Shorts", "Alley Oop" and, of course "Rip Van Winkle". I just hadn't realized that WABC and WMCA were playing that kind of thing all of the time. I was hooked. Happily hooked on music ever since.
DD, You're swell.

Glad i could help Jon... Warms my heart to know a few peeps are out there and paying attention to my madness...

It wasn't Cousin Brucie because we were listening in the morning. One of the AM ride time jocks.

BTW, I had a re recorded version of Rip Van Winkle. Supposedly done by the original Devotions, but not the same. A huge treat to hear the original production. I haven't heard it in years.

You'd be surprised at the people who listen to your music. It was the best ever.