Bobby Blue - Ride With Me Baby 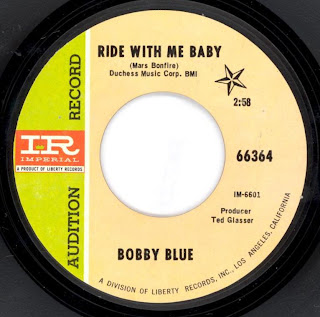 “Ride With Me" was song by rock band Steppenwolf featured on their album For Ladies Only. It was originally performed by Mars Bonfire on his self-titled album with a length over six minutes and under the title "Ride With Me, Baby". The song peaked at 52 on The Billboard Hot 100. The tune was covered by The Alice Cooper Band in the film, Diary of a Mad Housewife and obviously covered here by Bobby Blue.

Bobby Blue - Ride With Me Baby
Posted by Devil Dick at 8:17 AM

This is a Righteous Jam.
Bobby Blue even kinda sounds like John Kay.