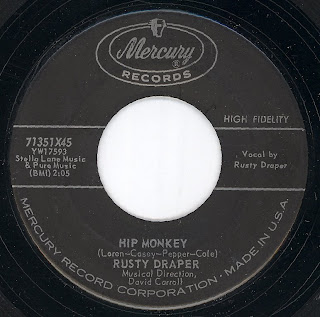 Rusty Draper - Hip Monkey
Posted by Devil Dick at 7:32 AM

You could have done a whole mix of monkey songs in honor of that poor lady.
btw it's not only old ladies with monkeys...I see young girls with them too.

yeah jack, my plan was a monkey mix however me and my turntable are currently apart and i don't know when i'll see her again...

I just discovered your blog today. I was getting my 45s from another blog, but he only posts them for a month, so anything older is gone. Glad to see I can go back month by month.

I think it might be a good idea to write the year of the recording more plainly in the blogs. Perhaps next to the download link.