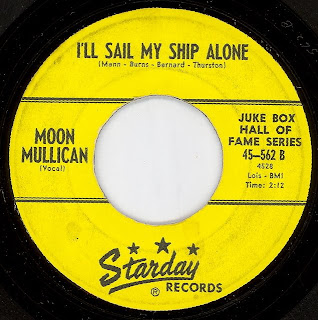 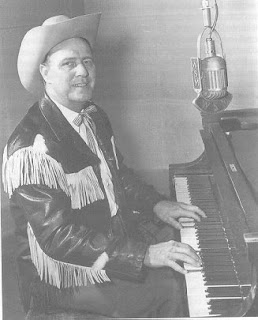 Aubrey Wilson Mullican (March 29, 1894 - January 1, 1967), known as Moon Mullican, was an American country and western singer, songwriter, and pianist. However, he also sang and played jazz, rock 'n' roll and the blues. Indeed, Mullican was one of the main influences on the formation of rock 'n' roll, he predated what would be done in rock 'n' roll by 20 years. He was associated with the hillbilly boogie style which greatly influenced rockabilly; Jerry Lee Lewis cited him as a major influence on his own singing and piano playing.
Moon Mullican - I'll Sail My Ship Alone
Posted by Devil Dick at 4:31 AM

Mullican was this crazy proto-Rock & Roll guy who seems like he deserves a lot more credit than he's given. Great song. W.

Moon Mullican certainly deserves a lot more credit than he gets. He was definitely among the first artists to mix blues, country and jazz to form what we now know as western swing, rockabilly and rock 'n' roll. He was also the first western swing bandleader who was the main singer as well. Moon sang and played all types of music and brought a great blues feel to it all.

My father died when I was 12. At 49 yrs old I am finding old black and white photos of Moon Mullican with my mother as I connect the stories from her of the friendship between Moon and my father. Dad was a musician who also played in the band for Jimmy H Davis, former governor of Louisiana, another talented figure who attended my dad's funeral. I am searching for any person who may have met my dad as I am writing a story to leave my own children so they may get to know him as well. His name was William Roy Turner Sr. born in Progress Ms. in 1927. He was buried in Baton Rouge in April of 1974. Dad helped Moon move to Texas in or around 1963 or 64. The two played music together as well. Anyone out there know my dad? Your story will help me to know him and give the gift to his grandchildren. my email is heathererwin61@yahoo.com

i hope you find what you are looking for. i wish i could help. and thank you for stopping by and sharing. if you have anything else to share please feel free!
Thanks!

Moon Mullican is a great artist and was the first to fuse blues, country and R&B paving the way for Jerry Lee, Elvis and others to finish what he started. Not enough of his albums are released but check out:

Yes, Moon was a great singer, musician and showman who was among the first to fuse blues, country and R&B to form what to all intents and purposes was rock 'n' roll. Check out this compilation online here:

The 1930s song 'It must be love' reminds me of Jerry Lee Lewis' 'Great balls of fire' and 'Toodle oodle' -also 1930s- is very like Roy Orbison's 'Ooby dooby'. I understand that 'Love that might have been' was his last recording and is a fine country song.