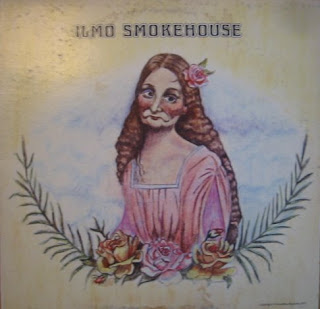 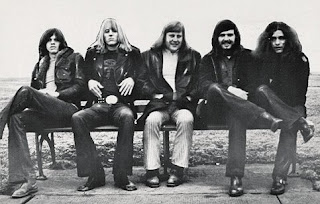 Short-lived outfit from 1971 but innovative prog band from Illinois with ex-Gonn members Gerry Gabel and Craig Moore. "We were heavy as hell, anti-war, pro-drug hippie all the way", remembers Moore. Without Gabel the group turned into Smokehouse, now presenting their progressive styles with glitter and make-up.

Formed in 1969 by the Tieken brothers from Quincy, Illinois. They'd previously been in the long-lived Freddy Tieken and The Rockers who'd been going at it since the late fifties. As The Gonn disintegrated in 1968, first Slink Rand and then Craig Moore joined 'The Rockers. Craig:- "Fred changed the name to The American Music Band, stealing it sort of from The Electric Flag. We played EVERYWHERE... Then when the horn guys all quit, we became Ilmo Smokehouse, heavy as hell, anti-war, pro-drug hippie all the way. When that eventually ended Slink, Dennis and I became 'Smokehouse' as a really heavy progressive trio. Later on we had Micki Free on guitar (later with L.A. soul group Shalamar). We wore glitter and make-up before Kiss, but they made it we didn't. It's all nuts, convoluted, insane, I can't believe I did all of this crap!"

Their album was recorded in Memphis at 'Beautiful Sound' Studio, owned by Dan Penn of Box Tops fame (as a songwriter producer). He engineered part of the session, with his partner Jim Johnson.

Extra nugget of useless info: Steve Gaines breifly played with the group before joining and then dying with Lynyrd Skynyrd.

Ilmo Smokehouse - Devil Take My Grandma
Posted by Devil Dick at 6:50 AM

be happy and love. kiss