The Fifth Order- A Thousand Devils Are Chasing Me 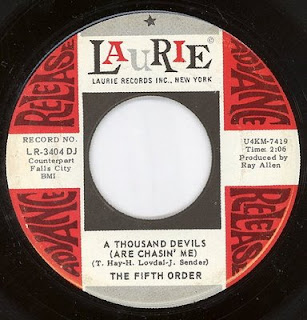 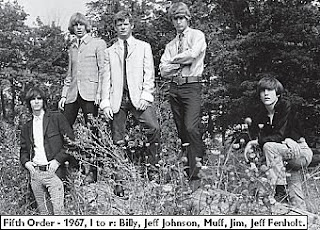 Some mid week light psych garage pop music for you with the fifth order from Columbus Ohio via 1967.

Their 1966 garage classic Goin' Too Far b/w Walkin' Away was a tremendous regional success, at the time becoming the biggest selling seven-incher from Columbus, Ohio. Their second local hit, A Thousand Devils (Are Chasing Me) b/w Today I Got A Letter, was picked up by Laurie for national release. These two records have long been recognized as sterling examples of Ohio's vibrant mid-60s garage rock scene. But the story of the Fifth Order has remained untold, until now...

If you dig the scene check the full story here:

The Fifth Order- A Thousand Devils Are Chasing Me
Posted by Devil Dick at 7:16 AM

This is the release right before "A Question of Temperature." Cool!