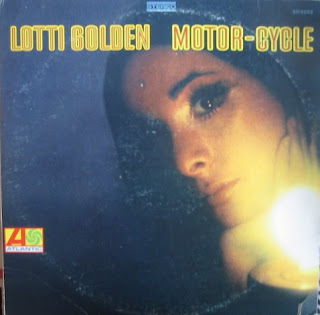 From the Lotti Golden Motor-Cycle album released on Atlantic Records in 1969 and produced by Bob Crewe, which is a weird soulish psych album that i find intriguing.

There is not a lot of info out there at least that i could find so if you know this chicks deal drop the knowledge...

i've never heard of her..

The lyrics on Lotti Golden's "Motor-Cycle" are amazing-- layered with meaning-sarcastic, funny and sometimes quite revealing. Golden tells the story of her East Village adventures in the late 60's.Though not promoted by Atlantic (too rad?) the LP is a cult classic.

The chick is still awesome. She's coming out with her website in 2010--and more.

I'm anonymous here because I have friends who know "this chick" ...I'll drop a little info: she's still gorgeous, she will be going live soon with her Wikipedia page and will follow with a website. Personally, I'm hoping she'll do a re-emergence thing, a la Patty Smith. PS: I'm not the same anonymous on the prior posts.

I just found this site. Lotti Golden's biblical references are quite unusual and her "Motor-Cycle" is a unique album in rock history. Very enlightening.

Genius lyrics by Lotti Golden. A bit of google research on "Lucifer" sheds light on the subject--literally. Love this song. It is "awesome" indeed.

It's amazing that 40 years after Atlantic records dropped the ball and failed to promote "Motor-Cycle," Lotti Golden's epic LP remains a cult staple and continues to resonate with listeners. "A Lot Like Lucifer" demonstrates this was no ordinary artist or album. There are only a handful of talented artists like Golden whose music wasn't pushed by the establishment. Maybe Golden was too radical even for the late '60's.

Lotti Golden's "Motor-Cycle" LP was cited on Wikipedia's main page on April 10, 2011, in the Did You Know section: "Did you know...that the debut album by American singer-songwriter Lotti Golden was listed by New York Times music critic Nat Hentoff as one of the most influential albums of the late 1960s?"
Congrats to Ms. Golden and the album that keeps on going 40 years later, still sounding great. And that goes for the song from the album "A Lot Like Lucifer" one of my personal favorites.

"Motor-Cycle," although not widely known, is one of the best albums in the rock pantheon. Lotti Golden's opus has been described as the musical equivalent of Jim Carroll's "Basketball Diaries." This cult classic released in 1969, continues to attract listeners in the digital age. Hopefully, "Motor-Cycle" will soon be available on CD.

Oh, yeah, I love this album too. One can kind of get obsessed with it. The lyrics provide an almost one-of-a-kind window into the mind of an urban chic New York hippie in the late 60's. Beyond unique and quite enjoyable (did I say I was addicted?). Thanks for posting!

This is a crazy good album. Hope it's reissued on CD. New vinyl would be nice too, for us club DJs.