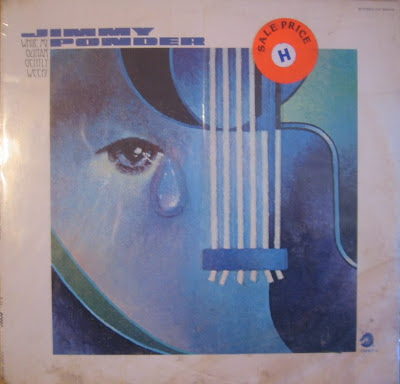 I just picked this LP up and man is it a good one. After the guitar-less post of Rare Bird i thought i needed a little guitar action in my life so here it goes. This is obviously a Beatles or George Harrison cover if you will and this is certainly "fuzzy" as you all know i dig! The rest of the album is a bit more smooth & jazzy with a lil' bit of funkiness thrown in. A pretty damn fine album that will certainly have me digging for more of Mr. Ponder's releases.

The jazz world is full of unsung legends that generally fly under the radar of mainstream attention. One such legend is Pittsburgh native and guitarist extraordinaire Jimmy Ponder, who has been recording soulful, swinging jazz for four decades strong.

An excellent guitarist with a soulful sound and the ability to uplift any funky jazz date, Jimmy Ponder has appeared on many recordings during his long career, over 80 as a sideman and 15 as a leader. Ponder began playing guitar when he was 14 and considers Wes Montgomery and Kenny Burrell to be his two main early influences and Thornel Schwartz later on. Offered a job with Charles Earland after having only played guitar three years, Ponder waited until he graduated from high school and then spent three years with the organist's group, recording several dates with Earland. He worked and recording with Lou Donaldson, Houston Person, Donald Byrd, Stanley Turrentine and Jimmy McGriff and in the early 1970's moved to New York (from Philadelphia), leading his own groups. Ponder has since recorded as a leader in the 1970's for Cadet, ABC/Impulse, TK, CBS and Toshiba, in the 80's for Milestone and in the 90's for Muse and HighNote.

Ponder, like his idol Wes Montgomery, plays with his thumb exclusively. Unlike Montgomery, however, Ponder exercises a more aggressive, punchy approach that makes his instrument rattle and hum, creating moments of sheer exuberance which can certainly be heard on this cut.

Jimmy Ponder - While My Guitar Gently Weeps
Posted by Devil Dick at 2:45 PM

Good post and this post helped me alot in my college assignement. Say thank you you as your information.

Pretty nice blog you've got here. Thanks the author for it. I like such themes and everything connected to them. I would like to read more soon.