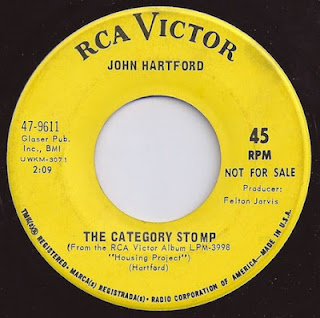 Sticking w/ the weirder side of things today w/ The Category Stomp from Mr. John Hartford. I'm not familiar w/ and don't know much about John Hartford but this song is pretty damn weird and awesome. It's some hillbilly bluegrass psychedelic hybrid complete w/ backwards guitar solo. Seems Mr. Hartford was taking the piss out of the whole "psych" thing in the year 1968....? Intentional or not, it rules. Seems from what i've heard most of Mr. Hartford's other material is a bit more on the "standard" bluegrass side.

Here is a bit of info from wiki:

John Cowan Hartford (December 30, 1937 – June 4, 2001) was an American folk, country and bluegrass composer and musician known for his mastery of the fiddle and banjo, as well as for his witty lyrics, unique vocal style, and extensive knowledge of Mississippi River lore. Hartford performed with a variety of ensembles throughout his career, and is perhaps best known for his solo performances where he would interchange the guitar, banjo, and fiddle from song to song. He also invented his own shuffle tap dance move, and clogged on an amplified piece of plywood while he played and sang.

Love this one, and the clip, too! Thanks so much!

John Hartford was awesome! I'm sure the psych out was intentional. He had an awesome wit, and the late '60s were his most creative period.

i thought u were dead gil???

I'll always remember him for his classic advice song,"Don't Leave Your Records In The Sun."

ha! i don't know that one. gonna have to look it up!
cheers!

check out the steam powered aeroplane record, it's definitely the weirdest one. also keep a' posting my good man!