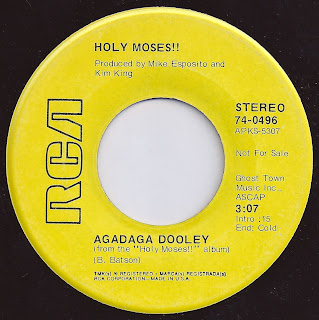 weird little boogie pop psych number w/ some cool wah guitar by Holy Moses from 1971. Here is some info i lifted off the webz...

Though short-lived, Holy Moses came up with one of the psychedelic era's most enduring hard rock one-offs, packed with strong songs and blazing guitar parts by Ted Spelios.

The late-'60s and early-'70s musical landscape is marred with one-shot albums.

Thousands of bands took a stab, failed to hit the jugular, and disappeared quietly into the night, but only the good lord knows why such a fate was handed down to Holy Moses.

The band's lone, eponymous release has all the ingredients of a bonafide classic.

Recorded at Jimi Hendrix's newly built Electric Lady studio and produced by Kim King (Lothar & The Hand People) and Mike Esposito (The Blues Magoos), it sounds just as fresh and full today as it must have back then.

Billy Batson -- which may not be his real name, since it's the mild-mannered moniker of Captain Marvel -- wrote all the songs with a clear sense of humor and an undeniable swagger.

His roughhouse storytelling was propelled to another dimension by the six-string prowess of one Ted Spelios: a man who is said to have impressed a young Bruce Springsteen during his brief stint in another one-album band called Kangaroo.

"No Turnin' Back" is a sure mixtape highlight. Spelios' shredding is righteous, totally supporting the saloon piano and a tale of love -- half way out the door -- as moaned by Batson.

With a hint of southern revival cutting through the sombre barroom rowdiness, Billy's husky voice fleetingly wanes under the struggle, sounding like a clear influence on Kings Of Leon and other like-minded bands that would crop up decades later.

"Roll River Roll" hits roughly the same area, but with a church organ instead of piano.

The plinking tone that occasionally surfaces, care of Ted, sounds like Soundgarden's "Black Hole Sun" or something Tom Morello might use.

Typically, though, the album rambles through rockin' psychedelic R&B numbers, the band's bread and butter.

They were as good as anyone at the up-tempo numbers, yet the two dismal tunes are the most thoroughly engaging, the ones where they let their guard down and truly emote.

I cannot fathom why Holy Moses!! wasn't a gold record in its time, or why it's taken so long to appear on CD.

Didn't the world need a drunker Canned Heat (check "Agadaga Dooley" and you'll know)? I guess not, because the LP fizzled on release and the band followed suit shortly thereafter.

Sadly, Ted Spelios never got a third chance to fulfill his awesome promise and crumbled with mental problems, eventually becoming, -- according to legend -- a wine-making monk.

He could have easily been the next Robin Trower; the East Village already considered him the best guitarist alive next to Hendrix.

Teddy Speleos had earlier played with Kangaroo, whilst Bill Batson was later the leader of eighties new wave outfit Hypstrz. Marty David was also a session man, playing with Jackie Lomax, Van Morrison and others