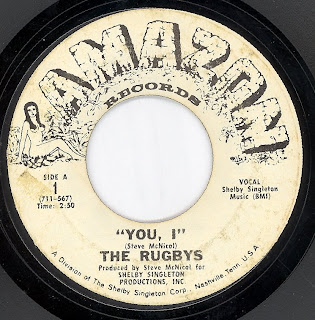 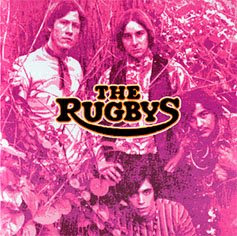 Something to get yout weekend started, some nice heavy, fuzzy, funky and psychedelic Rock and roll from 1969 by the Rugbys!

To anyone that follows the devil's music, i know my posts have been pretty eratic and non-consistant lately but that's just how we roll here, loosey goosey. But in all seriousness i no longer have a home PC so i get to it when i can... i hope of few are still tuning in lately...???

As for the Rugbys;

The band was formed in 1965 in Louisville, doing mostly covers. But as competition among Louisville groups to write and record original music increased, The Rugbys released two singles in 1968, "Walking the Streets Tonight" which was written by Doug Sahm of the Sir Douglas Quintet, and "Stay with Me" witten by Steve McNicol. Both songs were released locally, and played on Louisville radio stations. But it was not until the band decided to release the B-side of "Stay with Me", "You, I", also written by McNicol (which then went to #1 on local stations), that they were signed to Shelby Singleton's Nashville. Tennessee record label, Amazon Records. Amazon re-released the single "You, I" in 1969, and the song became a national hit, climbing to # 24 on the Billboard Hot 100 and # 21 in the Cashbox chart. The latter part of 1969 and all of 1970 were spent touring the mid-west and north east, playing on the same bill with artists like Bob Seger, Grand Funk Railroad, the James Gang and many others. Later that year, the band released their only album, Hot Cargo which received only mild success. "Wendegahl the Warlock" was the follow-up single to "You, I", but it did not chart.

The Rugbys rarely perform live anymore, however there are rumors about the release of a new CD featuring some previously unreleased material that was written about the same time as "You, I".

I like your attitude and the music you post. I'm planning to go through your archives and find some great music. Thank you.

I relistened to their album a few months ago. They really were a one hit wonder. Glad to see this posted because it really is a lost classic.
Another one in the same vein is "It's A-Happening"-Magic Mushrooms. I think they formed briefly at Penn and then disappeared.

Hey Devil, tough gig to exist without a home PC! Hope you find one soon. Thanks for the great posts man.