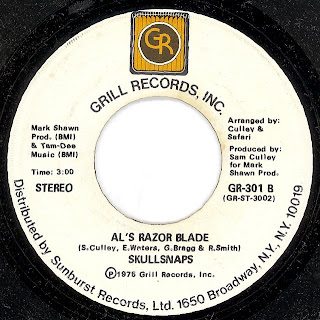 Skull Snaps was a mysterious funk group that released one eponymous album on the small GSF label in 1973 before disappearing. They were in fact the group originally known as The Diplomats who had released numerous singles between 1963 and 1970 with middling success.

Original vinyl copies of Skull Snaps' one and only LP continue to exchange hands on the rare groove market for three figures. There are two reasons for this: one, it's rare, and two, the drum breaks from the album have been feasted upon for samples so frequently that samples of the samples have likely been sampled. It's not that the album is spectacular — it's merely a decent early-'70s funk record from some accomplished musicians who don't exactly leave a trademark of their own throughout its nine songs. This soul-drenched funk album is most notable for the drums of "It's a New Day." It's the album's strongest cut, and the opening drum pattern is as ubiquitous they come — you can hear it get put to re-use in well over two dozen popular rap songs.

Today to get your weekend started I give you this single from 1975 that does not appear on the very collectible Skull Snaps full length album! A very cool groovy funky instrumental jam with plenty of wicked guitar work, just what the devil digs! Dig?