Atomic Rooster - All In Satans Name 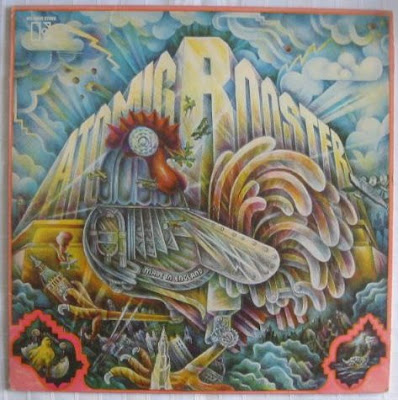 In January, 1970 Atomic Rooster (at that time consisting of Crane, Palmer and Nick Graham) released their self-titled debut album.

Between Palmer's departure (to be one third of Emerson, Lake & Palmer), and the recording of a second album, guitarist John Du Cann (Andromeda) joined them, giving a whole new dimension to the music with his distinctive guitar attack.

Having found success on the UK Singles Chart, the band was augmented with singer Peter French (ex-Leaf Hound) for their third effort on vinyl, In Hearing Of Atomic Rooster. It showed the band at full throttle. The import version included the hit single "The Devil's Answer", although this was strangely missing from the original UK release. After this album, Cann, Hammond and French left the band. French went to join Cactus, while John Du Cann and Paul Hammond teamed up with ex-Quatermass bass player John Gustafson and founded Hard Stuff.

Crane put the band together one more time, recruiting 1960s British R&B singer and ex-Colosseum vocalist Chris Farlowe. Along with old friends John Goodsall, then known as "Johnny Mandala", and Rick Parnell (who is the son of orchestra leader Jack Parnell, and composed material on the last album, plus came up with the piano riff on "Tomorrow Night") they released Made In England.

They managed to release one more album, Nice 'n' Greasy, but the sound was somewhat diluted, although the tracks "Voodoo In You" and "Take One Toke" reminded their fans of past glories. It proved to be their last record in the 1970s.

Atomic Rooster - All In Satans Name
Posted by Devil Dick at 7:38 AM


Hey, if you have an e-mail address I can send you a funny photo of him in his Nazi memorabilia shop circa '75....
he also had the UK hit w/Jagger-Richards written & produced Out Of Time, although me thinks the version on Aftermath is better.

well Dick, did the Hound send ya the pic as I didn't get one.