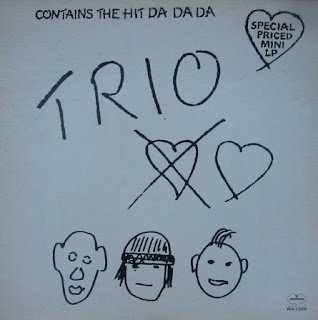 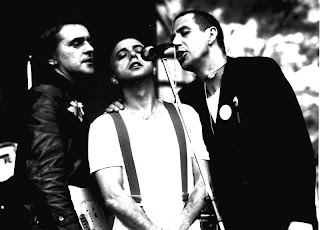 I used to date a gothy punk girl in the 80's and she definitely widened my punk and metal muisc pallet to a lot of different stuff and i remember her digging this tune a great deal. DJ Jack the Ripper what is your excuse? And do you have this "Long Version" or only the single?

Trio was formed in the small German town of Großenkneten in 1979. By far, the band is most noted for the song "Da da da, ich lieb dich nicht du liebst mich nicht aha aha aha" (or simply "Da Da Da"), or its English version "Da Da Da I Don't Love You You Don't Love Me Aha Aha Aha", which was a hit in about 30 countries worldwide.

The song is often given as an example of a song that has become popular while being extremely repetitive. However, to understand Trio one must understand its context. It was a product of the Neue Deutsche Welle (or NDW). However, Trio preferred the name Neue Deutsche Fröhlichkeit, which means "New German Cheerfulness", to describe their music. At that time, as now, popular songs were based on extremely simple structures that were ornately produced. Trio's main principle was to remove almost all the ornamentation and polish from their songs, and to use the simplest practical structures (most of their songs were three-chord songs). For this reason, many of their songs are restricted to drums, guitar, vocals, and just one or maybe two other instruments, if any at all. Bass was used very infrequently until their later songs, and live shows often saw Remmler playing some simple preprogrammed rhythms and melodies on his small Casio VL-1 keyboard while Behrens played his drums single-handedly while eating an apple. This simplicity was not simply due to an inability to sing or play well; Remmler's later solo career shows that he was capable of much more complicated music, and Kralle has demonstrated considerable ability as a guitarist in other ventures. Rather, their songs were bare-boned to show how bare the bones actually are.

Ha! I dug out some retro-electro kit last week one piece being the Casio VL-TONE (VL-1) which has one if it's rhythms used for the drum track on the Trio tune. You can also get Open Your Heart/Human Leage from the flute setting..

I have both. And my excuse is based on their songs "Sunday You Need Love" and "Ja Ja Ja" (both nicely covered by the Oblivians). These guys were punk savages!!

one day i'd like to peep the rippers vinyl collection....

Dude, I can't search your divshare anymore. Send me the vids of the kids.

This song was used to good effect in a VW ad a few years back. As usual, excellent selection...

did you take some bad taste drugs b4 posting this?

Anonymous, this was kind of an inside joke between DJ Jack the Ripper and I 1st off, 2nd, yes i own this record but i don't go dancing around naked while listening to it. Matter of fact i only just stumbled upon it and thought it would be, you know, kinda funny to post it... so whatever...
3rd, there is no accounting for taste.
bad tatse is actually one of my fave movies by the way... you should see it.
matters
need more coffee...

The Jesus Lizard also did a great cover of "Sunday You Need Love"!!

and yes i dance around naked to it...

"Da Da Da" was also covered by a French band named DUO , and was thus even more stripped down. *Dunno if a one-man-band has tackled it yet.

Thanks for posting, I haven't heard this in years! This was pretty much unavoidable in England in 1982, not that I minded much 'cos I thought it was terrific (especially as I'd just bought - & still own - a Casio VL1). Aha aha aha.