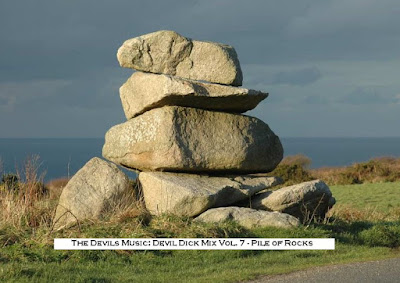 Here just a big dumb pile of rocks strung together by a guy with rocks in his head and a stone heart and just something to start your weekend out a little rocky... (lame i know, whatever....) The Devil's 7th mix, enjoy some big dumb rock!

REO Speedwagon – Ridin’ the Storm Out: Odd choice you say? Not so much.
Before all that lame ass 80’s shit and before that skinny Kevin what’s his name these guys were laying down some real rockers. Don’t believe me? Crank up Ridin’ the Storm Out and you be the Judge…

Leslie West – Blood of the Sun: From his solo album oddly enough titled “Mountain”.
This has one of THEE coolest and heaviest riffs ever produced short of Iommi himself.

Power of Zeus – It Couldn’t Be Me: Way sought after 70’s rocker with some killer moves and vibes. This song simply jams!

Groundhogs – The Grey Maze: I have a soft spot for these English blues hounds and their twisted mix blues & hard rock!

Heavy Metal Kids – Nature of My Game: They took their name from a gang of street kids featured in a novel by legendary beat generation writer William Burroughs. This is certainly a ROCKER and not metal…

I hope this is coming to a mailbox near me...