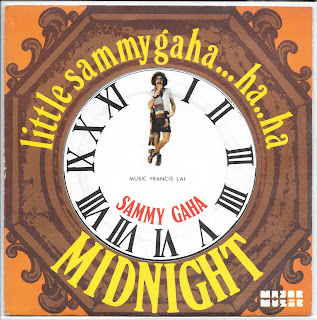 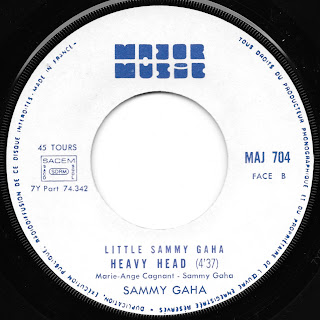 Little Sammy Gaha was an expatriate Australian singer who used Paris as a home base for recording and touring Europe throughout the early-to-mid seventies. Although not French, he cut a string of singles, including the romping ruckus that is “Heavy Head” in Paris, so I consider him a kindred spirit and outsider joker in this pack of Frankish Rock tribes. This altogether hairy vocalist was given to strange promotional gag shots in ripped T-shirts, short pants offset with clashing women’s leggings and blue platform shoes. Hahahahaha... Li’l Sammy’s even licking an all-day sucker on the sleeve of this demented 45. With a guttural vocal alternating between Louis Armstrong and a laryngitis-afflicted Wolfman Jack as they both beat the flames off the seat of their respective pants, his delivery is pricelessly demented. The backing music to “Heavy Head” combines Ten Years After’s Utopian Woodstock descending riff from the quick parts of “I’d Love To Change The World” that keep charging over a stampede of drums accompanied by the most waka-jawaka-ing I’ve heard within any song outside of “Papa Was A Rolling Stone.” And since it’s a fairly long track, it gives L.S.G. the space to explore the multitude of ways he can beat his heavy head, describing its condition in a hundred ways until he comes to the conclusion: “Don’t worry if it comes off! / You can get another one! / It’s allllllllright!!” Yeah, he’s gotta head full of ideas driving him insane, running roughshod AND gettin’ trampled in the process, hahahaha...Gaha truly broke out of the box and decided to just spazz it out on the B-side for kicks.

I took this review by music_emporium off the discogs page for this release because it pretty much nails it.

Hi guys, I would like to know if you would consider exchanging links with my blog: http://www.rockandrollarchives.net/

If yes please leave a comment there and I'll add your great blog to our list asap :) Thanks!

Madness, love this track! Just finding you again after a few years, so glad to see you are still kicking ass.